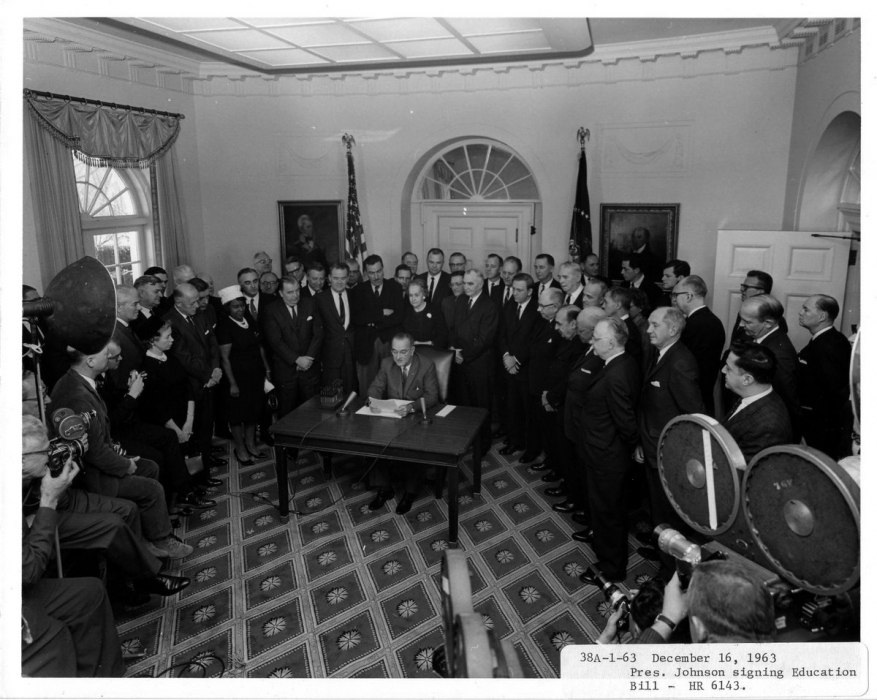 Decided on the same day as Lemon v. Kurtzman and Robinson v. Dicenso, Tilton v. Richardson, 403 U.S. 672 (1971), largely upheld provisions of the Higher Education Facilities Act of 1963 permitting federal aid for construction of secular buildings at church-sponsored colleges and universities, finding that the Act did not violate the religious clauses of the First Amendment. In this photo, President Lyndon B. Johnson signs the Higher Education Facilities Act. (Image via LBJ Library on Twitter)

Decided on the same day as Lemon v. Kurtzman and Robinson v. Dicenso, Tilton v. Richardson, 403 U.S. 672 (1971), largely upheld provisions of the Higher Education Facilities Act of 1963 permitting federal aid for construction of secular buildings at church-sponsored colleges and universities, finding that the Act did not violate the religious clauses of the First Amendment.

The grants from the Act were to be used only for the construction of nonreligious school facilities. The Act stipulated that schools were free to use the building for any purpose — religious or secular — 20 years after he grant had been given. A group of Connecticut-based taxpayers, including Eleanor Taft Tilton, challenged the Act in federal court. A special three-judge panel in federal district court rejected the plaintiffs’ challenges under the establishment and free exercise clauses. They appealed to the U.S. Supreme Court.

The decision for four justices was written by Chief Justice Warren E. Burger. Justice Byron R. White, who concurred in this case but dissented in the two companion cases, created a 5-4 ruling on behalf of the colleges and universities. Burger observed, “Numerous cases considered by the Court have noted the internal tension in the First Amendment between the Establishment Clause and the Free Exercise Clause.”

He believed the law had the secular objective of promoting the development of intellectual capacities and observed that the law limited monies for the construction of secular buildings. He found the law’s provision limiting usage to secular functions for 20 to be unconstitutional, but he thought this was severable from the rest of the law.

Burger argued that cases like Everson v. Board of Education (1947) had refuted the idea that any aid to church-related institutions was unconstitutional. In examining the primary effect of the Higher Education Facilities Act, Burger observed that the law “was carefully drafted to ensure that the federally subsidized facilities would be devoted to the secular and not the religious function of the recipient institutions. It authorizes grants and loans only for academic facilities that will be used for defined secular purposes and expressly prohibits their use for religious instruction, training, or worship.”

Burger denied that the law created excessive entanglement between church and state. He observed that college students were “less impressionable and less susceptible to religious indoctrination” than their high school counterparts.

Dissenters thought state could not enforce limits on building uses

In dissent, Justice William O. Douglas, joined by Justices Hugo L. Black and Thurgood Marshall, wrote that secular and sectarian purposes at such colleges were too intermeshed to distinguish one from the other. He did not believe the state could enforce limits on the uses of the buildings without continuing improper surveillance.