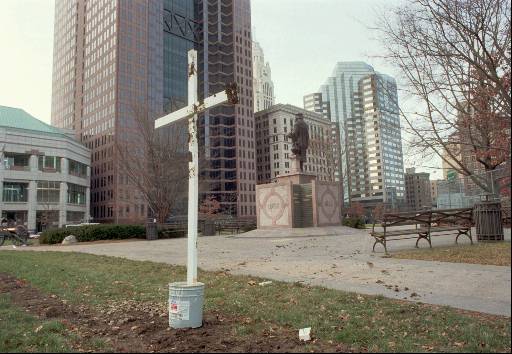 A mud-covered white cross stands on the southwest lawn of the Statehouse in Columbus, Ohio, Sunday, Dec. 17, 1995. The Capitol Square Review and Advisory Board, which oversees activities on the Statehouse grounds, was forced to give the Ku Klux Klan permission to erect the cross for four days during the holiday season. The cross has been a center of controversy resulting in the U.S. Supreme Court ruling in favor of the Klan's right to place the cross on the Statehouse lawn. The mud is a result of the cross having been knocked down by a group of youths protesting its presence. (AP Photo/Chris Kasson, reprinted with permission of The Associated Press)

In Capitol Square Review and Advisory Board v. Pinette, 515 U.S. 753 (1995), the Supreme Court ruled that the Ku Klux Klan had the right to erect a cross next to a Christmas tree and a menorah on public property.

The Court majority concluded that the display did not violate the establishment clause of the First Amendment and was consistent with the free speech rights of the Klan and other such organizations.

Capitol Square, the state capitol grounds in Columbus, Ohio, had long been used by diverse groups for gatherings, speechmaking, and erecting displays. In December 1993, the Capitol Square Review Board authorized placing a Christmas tree and a menorah in the area but denied a request by the Ku Klux Klan to erect a cross on the grounds for a two-week period ending on Christmas Eve.

The Klan sued in a case that raised intriguing questions about the relationship of the establishment and free exercise clauses; limits to free speech and “open public forums”; context, proximity, and symbolism; activities on government grounds versus unattended displays; solitary versus multiple displays; and the nature of a “reasonable observer.”

Although the Supreme Court ruled 7-2 in the Klan’s favor, the mix of concurrences, partial concurrences, and dissents reflect the difficulty the justices had in agreeing on the issues.

The Court addressed the display within the framework of the establishment clause because the review board had denied the Klan’s request on the grounds that its approval would violate this clause.

Justice Clarence Thomas, although concurring in the judgment, argued that the case did not present an establishment clause issue because the “Klan had a primarily nonreligious purpose in erecting the cross” and had “appropriated one of the most sacred of religious symbols as a symbol of hate.”

Capitol Square resembled Lynch v. Donnelly (1984), in which the Supreme Court had permitted a city to display a creche as part of a larger Christmas display in a private park, the difference being that Capitol Square involved a private display on public property.

It also recalled County of Allegheny v. American Civil Liberties Union (1989), in which the Court had rejected a privately sponsored religious display placed prominently inside a government building.

In Capitol Square, the Court plurality looked to Lamb’s Chapel v. Center Moriches Union Free School District (1993) and Widmar v. Vincent (1981), both of which permitted private religious expression in a public forum. Both also involved the religious activities of groups, rather than an unattended display. The Court found this difference to be significant.

Justices disagreed about use of endorsement test in this case

The justices disagreed about the appropriateness of the endorsement test in Capitol Square.

Justice Antonin Scalia, who wrote the plurality opinion, thought it inappropriate because the display did not involve expression by the government itself. To him, private religious expression in an acknowledged public forum could not violate the establishment clause.

Justices Sandra Day O’Connor and David H. Souter, on the other hand, preferred the endorsement test for analyzing the case, believing that government endorsement can be an issue even when private, symbolic speech is involved. They were satisfied, however, that a disclaimer placed on the cross offered sufficient protection against perceptions of government endorsement.

Would a reasonable person assume government sponsorship of the cross?

Whereas activities outside government buildings often involve groups seeking redress of grievances and thus do not imply government endorsement, a freestanding display, according to Stevens, would send a very different message to all but the “ultra-reasonable observer.”

Many reasonable people, he wrote, do not understand the concept of a “public forum,” but they “do know the difference between a state capitol and a church.”

Stevens quoted at length from the majority and dissenting opinions in the landmark Everson v. Board of Education (1947), in which the court — although upholding government reimbursement for the transportation cost to parents to send their children to parochial schools — had used strong separationist language relative to the establishment clause. Stevens underscored that his disagreement with the Court was over basics, not incidentals.