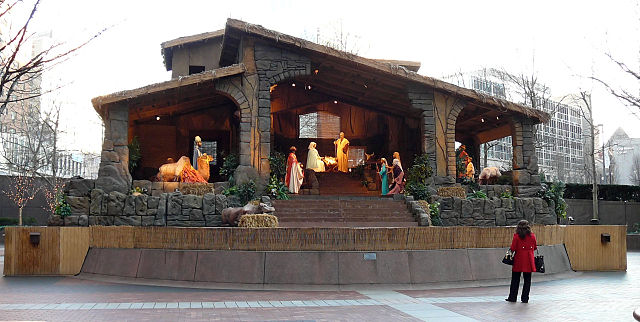 The U.S. Supreme Court forced Allegheny County to remove a creche display from inside the county courthouse in Pittsburgh, finding that it violated the establishment clause of the First Amendment. In 1999 as a response, U.S. Steel Tower erected its own version of a creche on privately owned land, a massive replica which has continued to be displayed and updated through the years. (Picture of the U.S. Steel Creche, taken 12/29/2006, CC BY-SA 2.5)

In County of Allegheny v. American Civil Liberties Union 492 U.S. 573 (1989), a splintered Supreme Court held that a creche display inside a county courthouse in Pittsburgh violated the establishment clause, but another display containing a menorah, a Christmas tree, and other decorations outside the City-County Building a block from the courthouse did not.

The City of Pittsburgh and Allegheny County erected the holiday displays each year. The American Civil Liberties Union challenged the practice.

Court considers whether government appeared to take a position on religion

In an opinion written by Justice Harry A. Blackmun, the Court held that the proper question was whether the challenged governmental practice had the purpose or effect of “endorsing” religion.

It looked to whether the government conveyed or attempted to convey that religion in general or a particular religion was favored or preferred. In spelling out this test, the Court said that the establishment clause prevents government from appearing to take a position on questions of religious belief or making adherence to a religion relevant to a person’s standing in the political community.

Armed with this endorsement test, the Court then examined the two displays at issue.

Noting that the creche scene stood alone, unlike a previous display upheld in Lynch v. Donnelly (1984), the Court ruled that such a singular display, especially in the “seat of government” impermissibly endorsed the Christian religion.

The display containing the menorah, on the other hand, situated the religious symbol among secular symbols of the holiday season, thus making it more akin to the display upheld in Lynch.

Justice Sandra Day O’Connor concurred, embracing the endorsement test that she had proposed in her concurring opinion in Lynch.

She rejected, however, the view presented by Justice Anthony M. Kennedy in a separate opinion that the Court should only look to whether the government used coercive practices to endorse religion. She believed that such a view failed to properly safeguard the First Amendment. She also rejected Justice Blackmun’s view that in order to pass constitutional muster, the government must use the “most secular alternative” to a religious symbol. Because a reasonable observer would not find the display of the menorah alongside a Christmas tree and other symbols to be endorsement of Judaism, she voted to uphold that display.

Justice William J. Brennan Jr. wrote separately because he believed that both displays violated the establishment clause, making the display containing the menorah unconstitutional as well.

Also writing separately, Justice John Paul Stevens considered the menorah display unconstitutional, because he believed the establishment clause should be read to create a strong presumption against the display of religious symbols on public property.

Justice Kennedy wrote separately because he felt the proper test should be whether the government used its coercive powers to aid religion. He found that absent coercion, the risk of infringement on religious liberty by symbolic accommodation was minimal. If people were offended by the displays in this case, they were free to turn their backs.

He found the endorsement test to be an unwelcome addition to establishment clause jurisprudence because it would strike down longstanding traditions. Therefore, applying his coercion test, he would have upheld both displays.

Roslyn Litman argued the case for the ACLU.