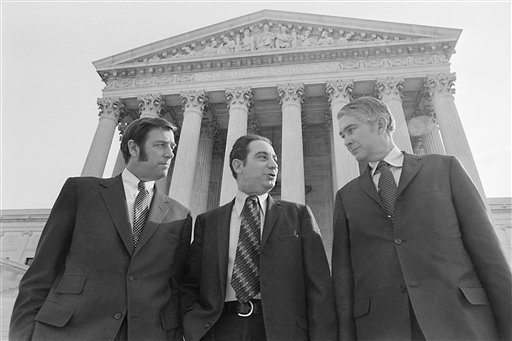 In Branzburg v. Hayes, the Supreme Court narrowly split on whether reporters had a constitutional privilege to decline to reveal to a court sources or information received in confidence. The Court declined to recognize a First Amendment reporter's privilege. In this photo, a reporter in one of the cases before the court with Branzburg, Paul Pappas, a television cameraman from New Bedford, Mass., is flanked by attorneys outside the Supreme Court in Washington Feb 23, 1972 where the justices were hearing his contempt of court charge concerning disclosure of information on a Black Panther headquarters during racial trouble in New Bedford two years prior. With him are Barrett Prettyman, left, of Washington, and William H. Carey of New Bedford. (AP Photo/Henry Burroughs, Courtesy of The Associated Press.)

In Branzburg v. Hayes, 408 U.S. 665 (1972), the Supreme Court ruled that freedom of press did not create a constitutional privilege protecting reporters from having to testify in grand jury proceedings about the identity of news sources or information received in confidence. The case was consolidated with In re Pappas and United States v. Caldwell.

Newspaper reporter Paul Branzburg of Kentucky refused to answer questions before grand juries regarding stories that he had authored and published involving illegal drugs. Journalists Paul Pappas of Massachusetts and Earl Caldwell of California also refused to appear before grand juries to answer questions about illegal activities they might have observed in writing about the Black Panthers.

All three reporters had promised their sources confidentiality and feared that revealing their sources would compromise their effectiveness as reporters.

Writing for the majority in the 5-4 decision, Justice Byron R. White clarified that this case did not involve the core values of the First Amendment. The reporters had not been required to reveal their sources nor had they been prevented from using any source of information, confidential or otherwise.

Further, the reporters had not been threatened with tax for publication or any penalty, criminal or civil, related to the content of a publication. Rather, the case concerned whether reporters’ obligation to be subject to grand jury subpoenas — by answering questions relevant to criminal investigations as all other citizens are required to do — would so burden newsgathering that they should be granted a privileged position.

Having established the primary question before the Court, White noted that the First Amendment does not invalidate all incidental burdens on the press that may be the result of generally applicable laws.

Instead, he explained, laws that advance a substantial public interest have been upheld even when they impose a burden on a free press; such laws include those regulating the requirements of the National Labor Relations Act, libel, the right of access to government information, and the need to protect a defendant’s right to a fair trial.

Observing that a majority of the states had failed to protect reporters from having to testify before grand juries, White announced that the Court was also unwilling to do so. Noting that both the common law and American history frowned upon those who concealed crime by not reporting felonies, White did not anticipate that the ruling would have much impact on newsgathering.

Justice Lewis F. Powell Jr. penned a short concurrence that almost read like a dissent. He emphasized that government officials could not harass journalists with bad faith investigations. He also wrote that “if the newsman is called upon to give information bearing only a remote and tenuous relationship to the subject of the investigation, or if he has some other reason to believe that his testimony implicates confidential source relationships without a legitimate need of law enforcement, he will have access to the court on a motion to quash, and an appropriate protective order may be entered.”

Justice Potter Stewart’s dissent, which Justices William J. Brennan Jr. and Thurgood Marshall joined, suggested that reporters should have to testify before grand juries only when the government shows a compelling interest in the testimony.

Stewart reasoned that the government must establish the following three elements before compelling a journalist to testify: