By Geoffrey P. Hull
Related cases in Right of Publicity 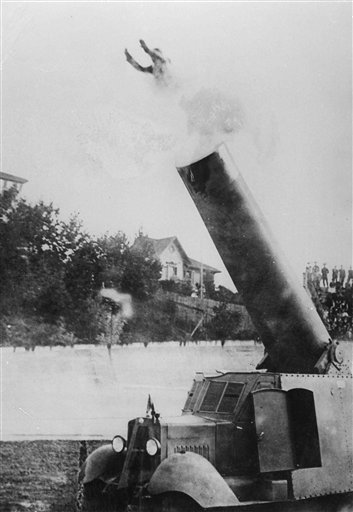 Hugo Zacchini of Turin, Italy, is shot from a specially built cannon invented by his brother in 1927. Zacchini successfully won a right of publicity case in Ohio after a television station aired an entire clip of his show. The Supreme Court in Zacchini v. Scripps-Howard (1977) compared the state's right of publicity law to copyright and patent laws and said the First Amendment did not immunize the press from violating the publicity law. (AP Photo, used with permission from the Associated Press)

In Zacchini v. Scripps-Howard Broadcasting Co., 433 U.S. 562 (1977), the U.S. Supreme Court ruled, 5-4, that the First Amendment did not immunize the news media from liability for violating Ohio’s right of publicity laws by broadcasting a performer’s entire act. The holding reversed the Ohio Supreme Court’s decision that the state law must allow a “privilege” to report on matters of legitimate public interest.

A Scripps-Howard television station included a 15-second film clip comprising the entire act of Hugo Zacchini, the Human Cannonball, in an evening news broadcast. A reporter had filmed the act despite Zacchini’s objection.

Zacchini sued for damages, claiming unlawful appropriation of his professional property. The Ohio Supreme Court held that Zacchini’s claim rested on the state’s “right of publicity” but that, absent actual intent to harm, “First Amendment principles require that the right of privacy give way to the public right to be informed of matters of public interest and concern.”

Defining Ohio’s right of publicity as “the exclusive control over the commercial display and exploitation of [Zacchini’s] personality and the exercise of his talents,” White distinguished Hill, saying that was mainly a “false light” right of privacy case where the plaintiff had sought to stop publication. Zacchini, however, presented an action that was more akin to appropriation of some property interest. White said Ohio’s right of publicity was “closely analogous” to copyright and patent law where the focus is on individuals’ rights to get paid for their endeavors.

Broadcasting Zacchini’s entire act threatened the economic value of the performance: the right of publicity, “provides an economic incentive for him to make the investment required to produce a performance of interest to the public. This same consideration underlies the patent and copyright laws long enforced by this court.”

Those laws, White said, were constructed to benefit the public by encouraging the dissemination of more productions. White observed that Zacchini did not try to stop the broadcast of his act, but simply attempted to be compensated for it.

Dissenting justices said broadcast should be protected by First Amendment

Justice Lewis F. Powell Jr., joined by two others, dissented, saying that First Amendment values should protect the station. Though not using the words “chilling effect,” Powell voiced concern that a television station might decide not to show any part of an act or event for fear of being sued.

“The public,” he said, “is then the loser.” He argued that a person performing in public cannot complain when the media report on the act. Justice John Paul Stevens based his dissent on his uncertainty as to whether the Ohio court had rested its decision solely on federal grounds.