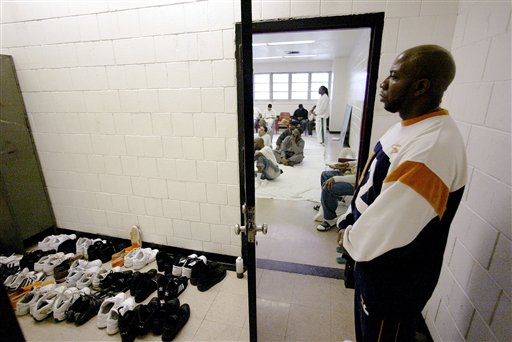 In Cutter v. Wilkinson, 544 U.S. 709 (2005), a case involving a challenge by prisoners against the Ohio director of rehabilitation and correction, the Supreme Court unanimously ruled that the provisions of the Religious Land Use and Institutionalized Persons Act of 2000 (RLUIPA) did not violate the establishment clause of the First Amendment in allowing members of minority religions to challenge unequal accommodation of their religious practices. In this photo, Muslim inmate Todd Williams stands outside a room used as a mosque during Friday afternoon's weekly worship at Rikers Island prison, in New York's East River, March 11, 2005. (AP Photo/Stephan Savoia, used with permission from The Associated Press.)

In Cutter v. Wilkinson, 544 U.S. 709 (2005), a case involving a challenge by prisoners against the Ohio director of rehabilitation and correction, the Supreme Court unanimously ruled that the provisions of the Religious Land Use and Institutionalized Persons Act of 2000 (RLUIPA) did not violate the establishment clause of the First Amendment in allowing members of minority religions to challenge unequal accommodation of their religious practices.

The Cutter decision continued an ongoing dispute between Congress and the Supreme Court over religious liberty that began in Employment Division, Department of Human Resources of Oregon v. Smith (1990). In that case, the Court had ruled that Oregon could deny unemployment benefits to members of the Native American Church who had been fired for violating a generally applicable state law prohibiting the use of peyote, which was part of their religious worship.

In response, Congress adopted the Religious Freedom Restoration Act of 1993 (RFRA). Through the enforcement clause in section 5 of the Fourteenth Amendment, Congress attempted to restore a standard that the Court had applied in earlier cases, among them Sherbert v. Verner (1963), in which the justices held that governments could not substantially burden the exercise of religious practices except in furtherance of “a compelling governmental interest” and through “the least restrictive means.”

In City of Boerne v. Flores (1997), the Court overturned the application of RFRA to state governments, deciding that Congress had exceeded its constitutional authority under section 5 in redefining the level of constitutional protection for religious liberty. In a brief concurrence in Boerne, Justice John Paul Stevens noted that RFRA violated the establishment clause.

New law, RLUIPA, would apply only to federal land and prisons

Based on Steven’s concurrence, the Sixth U.S. Circuit Court of Appeals then ruled, in 2003, that Congress’s latest religious liberty law — RLUIPA — impermissibly advanced religion, thus violating the establishment clause. Congress had adopted the narrowly tailored RLUIPA to apply specifically to federal land use regulations and to persons that states had institutionalized.

Before adopting the law, Congress held hearings that raised concerns about governmental insensitivity to the needs of incarcerated believers, especially members of minority, or nonmainstream, religions. Congress used its powers under the spending and commerce clauses to specify that prisoners exhaust administrative remedies before filing suits under RLUIPA.

Writing for the Court, Justice Ruth Bader Ginsburg justified RLUIPA as “a permissible legislative accommodation of religion that is not barred by the Establishment Clause” and as an example of permissible action within the “play in the joints” between the two religion clauses of the First Amendment.

Quoting from Smith, she acknowledged that free exercise often involves not simply belief but also actions. She emphasized, however, that safety in prisons could serve as a compelling governmental interest that might outweigh some claims of religious exercise. Citing Corporation of the Presiding Bishop of the Church of Jesus Christ of Latter-day Saints v. Amos (1987), Ginsburg further ruled that accommodation of specifically religious belief did not require equal accommodation of nonsecular preferences.

In a concurring opinion, Justice Clarence Thomas argued for his understanding of the establishment clause as a provision of federalism, preventing federal interference with state establishments.