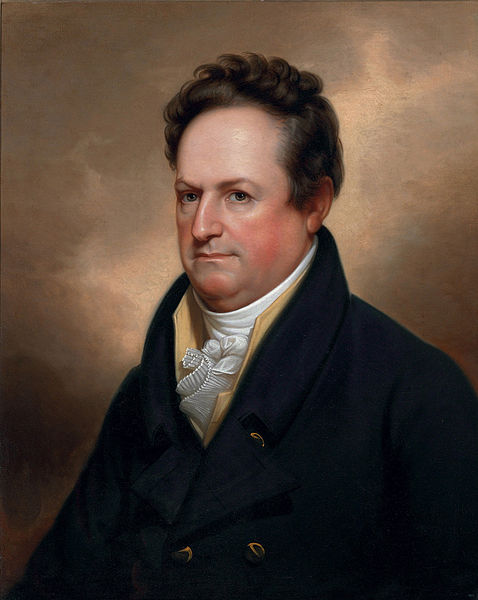 People v. Phillips (N.Y. 1813), which DeWitt Clinton (pictured here) wrote on behalf of the unanimous New York Court of General Sessions, or “Mayor’s Court,” has been described as “a constitutional landmark in equality theory; as the first free exercise case; as the origin of the evidentiary priest-penitent privilege; and as perhaps the earliest instance of group impact litigation” (Walsh 2004: 3). This case reiterated the First Amendment’s right to free exercise of religion. (Image via Wikimedia Commons, by Rembrandt Peale, circa 1823, public domain)

People v. Philips (N.Y. 1813), which De Witt Clinton wrote on behalf of the unanimous New York Court of General Sessions, or “Mayor’s Court,” has been described as “a constitutional landmark in equality theory; as the first free exercise case; as the origin of the evidentiary priest-penitent privilege; and as perhaps the earliest instance of group impact litigation” (Walsh 2004: 3). This case reiterated the First Amendment’s right to free exercise of religion.

New York Court summoned priest to testify about a confessional

The case originated when, during the trial of Daniel and Mary Philips, a New York court summoned Father Anthony Kohlmann to testify about the return of stolen jewelry, which he had apparently required as penance after hearing a confession. Father Kohlmann asked to be exempt from testifying on the basis that he could not breach the secrecy of the confessional. Although the prosecution had offered to drop the case, New York Catholics wanted a clearer precedent on their behalf that exempted comments from subpoenas issued to priests.

Led by William Sampson, a Protestant Irish immigrant lawyer, the defense argued that requiring priests to testify violated both common law principles and principles established by the religious liberty clause in Article 28 of the New York constitution. Although the state responded that the Catholic clergy was requesting a special privilege that could prove “inconsistent with the peace or safety of this state,” Sampson attempted to argue that American regard for religious liberties was to be preferred to the record of Ireland, where religious discord had dominated.

Clinton reasoned that if witnesses could not be forced to confess to crimes that stained their reputations, then surely the law would not require them to violate their consciences. Clinton denied that contrary Irish precedents should have much weight because they came from a dissimilar country consisting of “two great parties, the oppressors and oppressed.” Americans recognized that “[r]eligion is an affair between God and man, and not between man and man.” Both Article 28 of the New York constitution and the First Amendment of the U.S. Constitution were predicated not on mere “toleration” but on “religious freedom.” Protestants needed to extend the same privileges to Catholics practicing their own sacraments as they would to Protestant clergy practicing theirs.

This precedent has been cited as an early example before Sherbert v. Verner (1963), in which an American court allowed for a special privilege for a minority religion to guarantee its free exercise. If so understood, the case could provide support for the Religious Freedom Restoration Act of 1993, which sought to compel the Court to honor religious exercises unless they conflicted with a “compelling interest,” and in opposition to U.S. Supreme Court decisions in Employment Division, Department of Human Resources of Oregon v. Smith (1990) and City of Boerne v. Flores (1997), in which the Supreme Court ruled that the free exercise clause did not require governments to carve out special exceptions for religious practices contrary to generally applicable laws. In a concurring opinion in the latter case, Justice Antonin Scalia argued that the Philips case was “weak authority” for the dissenters.