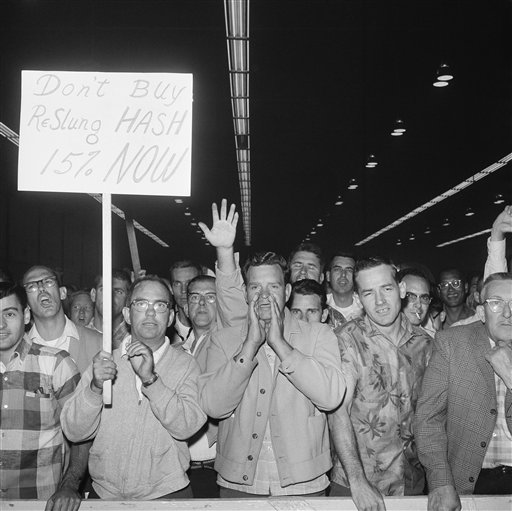 In International Association of Machinists v. Street, 367 U.S. 740 (1961), the Supreme Court overturned a Georgia court decision that had declared the union-shop provisions of the Railway Labor Act of 1926 unconstitutional.

Street and other machinists had argued that the union which they were forced to join was improperly spending money to support political causes and candidates with which they disagreed. The Court decided that if the law were interpreted so as not to require nonunion members to contribute to political activities, it would not violate First Amendment protections for freedom of expression.

Justice William J. Brennan Jr. wrote the majority opinion and noted that in Railway Employees’ Department v. Hanson (1956) the Court had decided that the union-shop provision requiring nonunion members to pay equivalents of union dues for the benefits they received was constitutional, but there had been no finding that monies designated as equivalent to union dues had been used to finance political activities.

Brennan believed that Congress had not intended to force employees to pay for political speech to which they were opposed and suggested that the lower court should refund portions of dues that went to political activities to employees who had protested against them.

In a concurring opinion, Justice William O. Douglas acknowledged that some forced association was necessary, but said it could never be conditioned “on the individual’s acceptance of the group’s philosophy.” Justice Charles E. Whittaker thought the part of the Court’s opinion relating to separating costs of political action from other costs was too onerous.

Justice Hugo L. Black’s dissent questioned the Court’s construction of the law at issue. He thought the Court should have struck the law down as unconstitutionally requiring individuals to spend their money on beliefs that they did not support. He cited James Madison and Thomas Jefferson in their opposition to requiring individuals to contribute any of their money toward religious establishments.

Justice Felix Frankfurter wrote a separate dissent, joined by Justice John Marshall Harlan II, questioning the Court’s construction of the law. They thought that union expenditures, even on behalf of political activities, were closely tied to other union objectives and that Congress had intended to allow this practice to continue. They thought the political expenditures at issue were too “miniscule” to “claim constitutional recognition.”