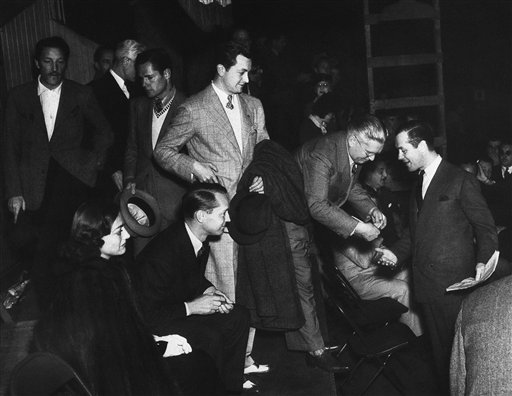 Labor unions sometimes have negotiated for "closed shops" with employers, meaning that a company can only hire members of a union. Some states have passed anti-closed shop laws. Labor unions challenged the constitutionality of anti-closed shop laws, saying they violated the First Amendment. But the Supreme Court rejected those arguments in Lincoln Federal Labor Union v. Northwestern Iron and Metal Co. (1949). This picture was taken at a Screen Actors' Guild during the mass meeting in 1937 in Los Angeles to discuss a guild strike and a closed shop offer of producers. (AP Photo, used with permission from the Associated Press

In Lincoln Federal Labor Union v. Northwestern Iron and Metal Co., 335 U.S. 525 (1949), the Supreme Court rejected labor union challenges and affirmed that anti-closed shop laws were not in violation of First Amendment rights of speech, assembly, or petition and did not interfere with the equal protection clause of the Fourteenth Amendment.

The Court decided this case along with Whitaker v. North Carolina and on the same day as American Federation of Labor v. American Sash and Door Co. (1949).

Lincoln Federal upheld a Nebraska constitutional amendment, and Whitaker upheld a North Carolina law, both of which prohibited “closed shops,” limiting employment to union members. Both state supreme courts had upheld these laws.

Writing for the Court, Justice Hugo L. Black, after summarizing the First Amendment claims in the case, concluded the following:

Black cited a number of precedents to dismiss the claim under the contract clause and also dismissed equal protection arguments. He tied the Court’s decision to the renunciation of the line of cases beginning with Allegeyer v. Louisiana (1897), continuing through Adair v. United States (1908), Lochner v. New York (1905), and ending with Coppage v. Kansas (1915), in which it had enforced extraconstitutional ideas of due process to limit economic regulations.

Justice Felix Frankfurter wrote a concurring opinion included at the end of American Federation of Labor in which he stressed the merits of judicial deference to the other two elected branches of government.

Justice Wiley B. Rutledge also included a concurring opinion in the accompanying case, joined by Justice Frank W. Murphy, indicating that he did not think the cases settled the issue as to whether a union might call a strike in order not to have to work with nonunion men.