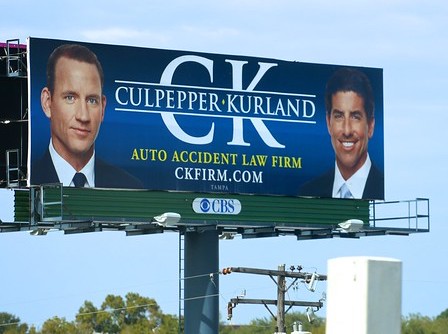 In Ohralik v. Ohio State Bar Association, 436 U.S. 447 (1978), the Supreme Court ruled that states can prohibit direct, face-to-face solicitation by attorneys. This ruling ensures that states can regulate at least some speech-related activities of professionals without necessarily running afoul of constitutional protections. Attorney advertising has often come up as a First Amendment issue dealing with commercial speech in the courts. This photo shows an example of such advertising. (Image via Tom Woodward on Flickr, CC BY-SA 2.0)

In Ohralik v. Ohio State Bar Association, 436 U.S. 447 (1978), the Supreme Court ruled that states can prohibit direct, face-to-face solicitation by attorneys. This ruling ensures that states can regulate at least some speech-related activities of professionals without necessarily running afoul of constitutional protections.

Albert Ohralik, an Ohio attorney, personally solicited two eighteen-year-old women who recently had been involved in a car accident. He visited one woman while she lay in traction in a hospital bed. The Ohio Bar Association suspended him from practicing law on the grounds that in-person solicitation violated rules of professional conduct. (Many categories of professionals — doctors, pharmacists, accountants, and so on — are regulated, either by state or by professional organizations that are empowered by the state to set standards. For example, all 50 states regulate the practice of law.)

Court had been looking at constitutional protections for commercial speech

The case reached the Supreme Court on the heels of prior decisions that expanded constitutional protections for commercial speech. In Virginia State Board of Pharmacy v. Virginia Citizens Consumer Council, Inc. (1976), the Court ensured to pharmacists the right to advertise prescription drug prices. The majority recognized that “the free flow of commercial information is indispensable” and that “keeping the public in ignorance” is a “highly paternalistic approach” to governance that is inconsistent with the First Amendment. In Bates v. State Bar of Arizona (1977), the Court extended the commercial speech doctrine to allow truthful newspaper advertising by attorneys.

Ohralik argued that he had a First Amendment right to convey commercial information to the public, just as the attorneys did through the newspaper in Bates. The Supreme Court disagreed unanimously.

Writing for the majority, Justice Lewis F. Powell Jr. reasoned that Ohio had a legitimate interest in preventing solicitations that involve fraud, undue influence, intimidation, and the like and that the Disciplinary Rules of the State Bar Association were the appropriate means for preventing and regulating unethical practices. Justice Powell characterized the state’s interest in regulating in-person legal solicitation as “compelling,” especially when this communication targeted vulnerable audiences or threatened the integrity and reputability of the legal profession.

Court said motive of solicitor determines whether speech is protected

In contrast, the Court also ruled the same day in In re Primus (1978) that a state was powerless to prohibit a legal solicitation written not for pecuniary gain but for the purpose of “vindicating” a client’s “civil liberties.” Hence, the motive of the solicitor is a key to determining constitutional protection for speech.

In-person solicitation is an issue of concern to courts

In-person solicitation has remained an issue of concern to the courts. The Supreme Court held that the rules applicable to in-person legal solicitation could not be invoked to apply to attorney advertising in Zauderer v. Office of Disciplinary Counsel of the Supreme Court of Ohio (1985). The Court concluded that Ohralik was an inapt precedent for deciding cases involving in-person solicitations by certified public accountants in Edenfield v. Fane (1993). However, in Florida Bar v. Went For It, Inc. (1995), the Supreme Court upheld a rule of the Florida Bar prohibiting personal-injury lawyers from sending direct-mail solicitations to victims or their families within 30 days of a disaster or accident, reiterating concerns regarding vulnerable recipients and the integrity and reputation of the legal profession first expressed in Ohralik.