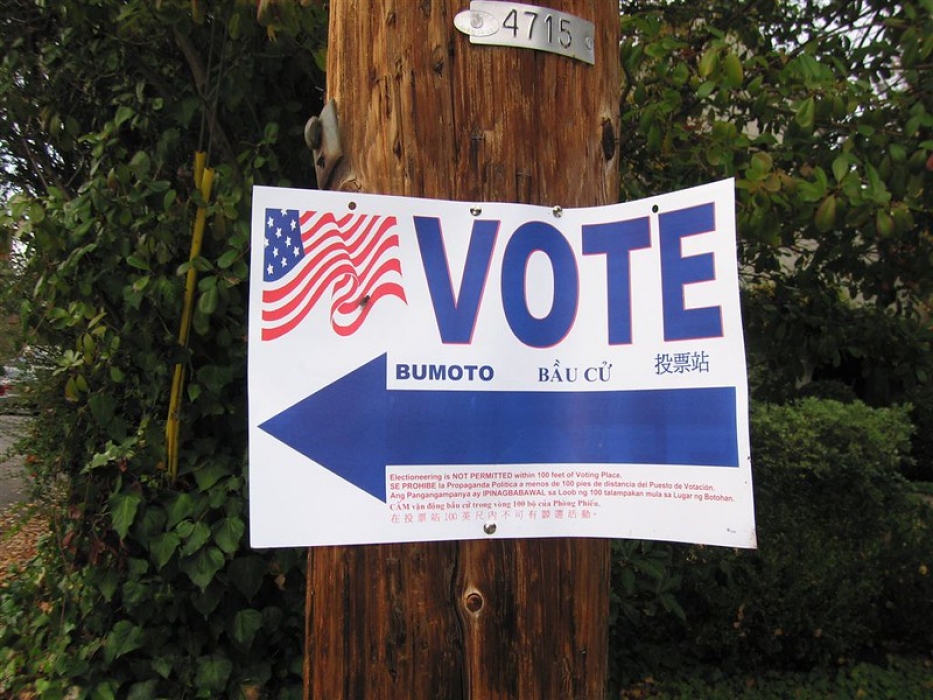 In City Council of Los Angeles v. Taxpayers for Vincent, 466 U.S. 789 (1984), the Supreme Court upheld a city ordinance prohibiting the posting of signs, including for political candidates, on utility poles, cross wires, and other structures on public property. The Court said the ordinance was a permissible "time, place, or manner" restriction. (Image of a November 2005 California Election Day sign on a telephone pole via hjl on Flickr, CC BY 2.0)

In City Council of Los Angeles v. Taxpayers for Vincent, 466 U.S. 789 (1984), the Supreme Court upheld a city ordinance prohibiting the posting of signs, including for political candidates, on utility poles, cross wires, and other structures on public property.

The ruling reaffirmed a district court decision, based largely on the city’s right to respond to aesthetic and safety concerns, that the Ninth Circuit Court of Appeals had reversed.

In the opinion for the Court, Justice John Paul Stevens defended the ordinance against claims that it violated freedom of speech because it was unconstitutionally applied or overly broad.

Stevens argued that overbreadth did not apply because the ordinance would not affect other third parties any differently than the petitioners, the supporters of a candidate running for election to the Los Angeles City Council who sought to prevent the city from removing signs that they had posted during a campaign.

Stevens asserted that the ordinance, which applied to all signs, was not intended to regulate speech on the basis of its content. Given this, the case was covered by the decisions in:

Stevens considered the law an appropriate restriction as to “the time, place, or manner of expression.” The law left candidates with alternate means of communication.

Moreover, Stevens noted that the law was more narrowly tailored than attempts to control litter by banning the distribution of pamphlets.

Denying that utility poles were the equivalent to public streets and parks, the Court also rejected the idea that the public property at issue constituted a “public forum” for First Amendment purposes. Although the city might have chosen to make exceptions for some forms of political speech, it was not constitutionally obligated to do so, and such exceptions might even have resulted in unconstitutional content discrimination.

Justices Thurgood Marshall and Harry Blackmun joined Justice William J. Brennan Jr. in his dissent focusing on the communication value of posting signs and “the unavoidable subjectivity of aesthetic judgments.”

Under the circumstances, he would permit a total ban on such displays only if the city could show that “the ban (1) furthers a substantial government objective, and (2) constitutes the least speech restrictive means of achieving that objective.”

He feared that the Court would be unable to distinguish attempts to beautify a city from attempts to suppress speech. He would have required the city to show that its law relative to speech was part of a broader set of laws designed to pursue the city’s goal “of eliminating visual clutter in a serious and comprehensive manner” and “through programs other than its ban on signs.”