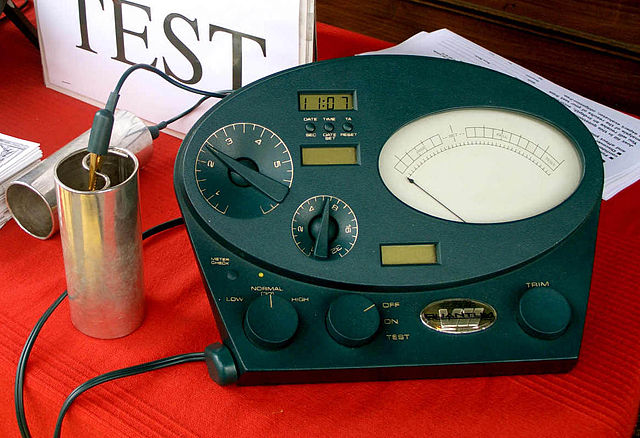 This electronic device is used by auditors of the Church of Scientology to help members gain increased spiritual awareness. Church members are required to pay for this service, and in Hernandez v. Commissioner of Internal Revenue (1989), the Supreme Court said the payments were not tax-deductible. Taxes paid on these sessions did not violate the First Amendment. (Image via Wikimedia Commons, CC BY-SA 3.0)

The Church of Scientology conducts one-on-one sessions in which church leaders use electronic devices designed to measure skin responses to help members, including Robert Hernandez, gain increased spiritual awareness through sequential levels of auditing. The sessions operate according to the Scientology “doctrine of exchange,” which requires individuals to pay for everything they receive. The sessions, which the church advertises, are the Church’s “primary source of income.”

Court said payment for such sessions was not tax-deductible

Justice Thurgood Marshall wrote the opinion for five members of the Court, upholding decisions by the Tax Court and the First and Ninth Circuit Courts of Appeal. Marshall first addressed statutory issues. Traditionally, the IRS had distinguished between gifts that were made without expectation of reward and quid pro quo exchanges in which donors received something in exchange. Marshall determined that payments for auditing sessions fell into the latter category. Prohibiting deductions for auditing sessions was similar to prohibiting parents from deducting tuition payments to parochial schools. If the IRS were to attempt to distinguish “religious” benefits from others, it would have to become more, rather than less, entangled.

Court said tax law did not violate the First Amendment

In addressing the establishment clause issues, Marshall denied that the law preferred some denominations over others. Relying heavily on the decision in Larson v. Valente (1982), Marshall decided that the regulation was not facially discriminatory. The Court applied the three-part test established in Lemon v. Kurtzman (1971). The purpose of the law was appropriate because it was not “born of animus to religion in general or Scientology in particular.” The primary effect of the regulation neither advanced nor inhibited religion. Although the IRS had to determine which transactions were quid pro quo exchanges and which were not, this inquiry was no more intrusive than other inquiries that the Court had previously upheld.

In addressing free exercise claims, Marshall denied that the IRS had imposed a substantial burden on the Church of Scientology. Church members were not opposed to paying taxes; the only burden imposed was that adherents would have less money to purchase additional sessions.

Court said these payments differed from other deductible fees

Marshall further denied that the IRS was engaged in selective prosecution. Marshall thought there was a fundamental difference between the fees at issue here and traditional “pew rents, building fund assessments, and periodical dues,” which the Court had previously exempted. In any event, he did not think the record provided adequate information to reach such a conclusion.

Justice Sandra Day O’Connor wrote a dissent joined by Antonin Scalia. They viewed the IRS regulation as “a singular exception” to longstanding treatment of other faiths and did not believe it was distinguishable from deductions for pew rents and other contributions. Justices William J. Brennan Jr. and Anthony M. Kennedy did not participate in the decision.