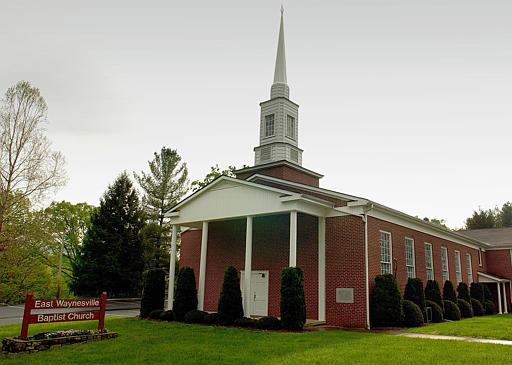 In 1970, the Supreme Court upheld New York's property-tax exemption status for churches against a challenge that the exemption was a violation of the establishment clause of the First Amendment which prohibits establishment of religion. The Court introduced the doctrine of "excessive entanglement" that later became part of a test to discern whether a law was an improper favoring of a religion under the First Amendment. (Tax exemption status has continued to create controversy when it comes to churches. This is a photo of East Waynesville Baptist Church in North Carolina, which was the center of a controversy in 2005 when its pastor endorsed President Bush from the pulpit, endangering the federal tax exempt status of the church. The Internal Revenue Code sec. 501(c)(3) prohibits tax-exempt organizations, including religious entities, from engaging in campaign activities. The provision has garnered increased public attention from pastors, who protest it. AP Photo by Alan Marler, used with permission from The Associated Press.)

In Walz v. Tax Commission of the City of New York, 397 U.S. 664 (1970), the Supreme Court held that there was “no genuine nexus between tax exemption and establishment of religion.”

The case was the first to challenge property tax exemptions for churches, and it was the first to articulate the “excessive entanglement” doctrine, later incorporated into the Lemon test based on Lemon v. Kurtzman (1971).

At issue in Walz was a New York statute providing that “[r]eal property owned by a corporation or association organized exclusively for the moral or mental improvement of men and women, or for religious ...purposes... and used exclusively for carrying out ...such purposes... shall be exempt from taxation as provided in this section.”

The plaintiff, Frederick Walz, a taxpayer and resident of New York, sued the New York City Tax Commission, raising a First Amendment establishment clause claim and seeking an injunction against the granting of the exemptions.

Chief Justice Warren E. Burger wrote the 7-1 majority opinion — the first of many establishment clause decisions penned by the chief justice during his tenure. Burger reviewed the historical roots of the establishment clause — namely that “the ‘establishment’ of a religion connoted sponsorship, financial support, and active involvement of the sovereign in religious activity.”

This accommodationist interpretation of the historical development of the establishment clause signaled the favorable treatment the New York exemption would receive. Indeed, the Court decided that the exemption “has not singled out one particular church or religious group or even churches as such; rather, it has granted exemption to all houses of religious worship within a broad class of property owned by nonprofit, quasi-public corporations.”

Thus the legality of tax-exempt status for religious institutions was settled in the affirmative.

The main doctrinal contribution of the decision was the introduction of the excessive entanglement doctrine. In an oft-quoted passage containing the seed of the Lemon test’s third prong, Burger noted, “No perfect or absolute separation is really possible; the very existence of the Religion Clauses is an involvement of sorts— one that seeks to mark boundaries to avoid excessive entanglement.”

Under this test, an “establishment” with a religious entity may exist, even in the absence of direct financial support or official endorsement of a particular faith, if there is excessive entanglement between government and religious institutions.