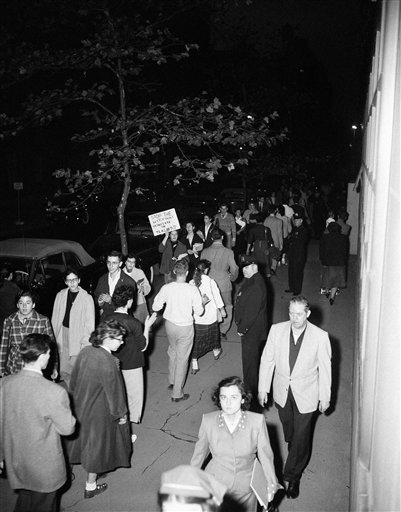 In 1952, at the time of the Supreme Court decision upholding a law that prevented employment of public school teachers who held "subversive" or Communist views, there was great concern that such teachers would "pollute" the minds of young people and undermine the American way of life. During this time, many people protested the firing of public school teachers and college professors based on their supposed viewpoints or political leanings. In this 1952 New York photo, students from three city colleges picket in front of the Hunter College building as the Board of Higher Education was meeting to discuss dismissal of three teachers who had refused to tell a Senate Investigating Committee whether they were or had ever been members of the Communist Party. (AP Photo, used with permission from The Associated Press)

In Adler v. Board of Education, 342 U.S. 485 (1952), the Supreme Court upheld the so-called Feinberg Law, a New York statute designed to enforce existing civil service regulations to prevent members of subversive groups, particularly of the Communist Party, from teaching in public schools. The 6-3 decision rejected assertions that the law violated the First Amendment freedoms of speech and assembly.

Justice Sherman Minton, who wrote the opinion for the Court, observed that although individuals have “the right under our law to assemble, speak, think and believe as they will,” the decision in United Public Workers v. Mitchell (1947) had established that they do not have the “right to work for the State in the school system under their own terms.”

Minton pointed out that a “teacher works in a sensitive area in a schoolroom” and that a state had the right to exercise its “police power to protect the schools from pollution and thereby to defend its own existence.” He further observed that New York granted individuals hearings at which they could rebut charges against them.

Justice Hugo L. Black dissented, characterizing the law as an attempt “to mould people into a common intellectual pattern.” He favored instead a policy resting “on the belief that government should leave the mind and spirit of man absolutely free.”

Justice Felix Frankfurter dissented, largely on the ground that he found it unclear how the state law would operate and because he questioned the standing of the parties who brought the case.

Justice William O. Douglas also wrote a dissent, joined by Justice Black, in which he denied “the power of a state to place its employees in the category of second-class citizens by denying them freedom of thought and expression.”

“The public school is in most respects the cradle of our democracy,” he wrote. He further criticized the law for fostering “guilt by association” and for turning the school system into a “spying project,” typical of “a police state.” He observed that “the guilt of the teacher should turn on overt acts. So long as she is a law-abiding citizen, so long as her performance within the public school system meets professional standards, her private life, her political philosophy, her social creed should not be the cause of reprisals against her.”

The Court would abandon much of the reasoning of Adler in Keyishian v. Board of Regents (1967).