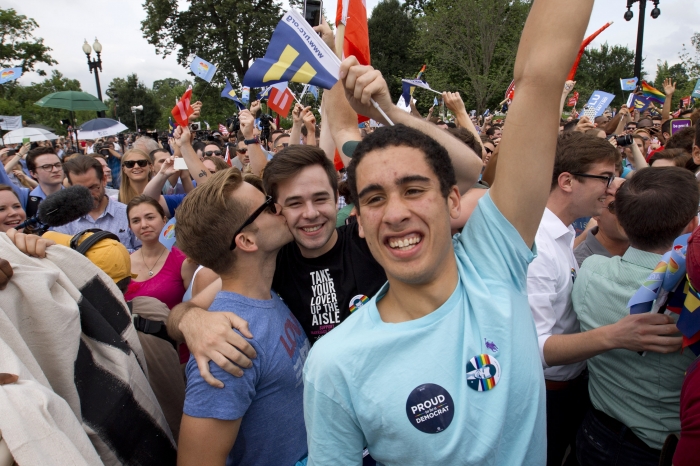 Twenty years after laws punishing teachers for "public homosexual conduct" were an issue in Board of Education of Oklahoma City v. National Gay Task Force, the efforts to recognize rights of gay people got its most significant victory when the Supreme Court struck down state bans against same sex marriage. In this 2015 photo, supporters of same-sex marriage celebrate the ruling in Obergefell v. Hodges. (AP Photo/Jacquelyn Martin, used with permission from the Associated Press)

In Board of Education of Oklahoma City v. National Gay Task Force, 470 U.S. 903 (1985), an equally divided Supreme Court (Justice Lewis F. Powell Jr. did not participate in the decision) affirmed the decision of the 10th U.S. Circuit Court of Appeals in a one-sentence per curiam opinion.

The 10th Circuit had struck down an Oklahoma law designed to punish state teachers who participated in “public homosexual conduct,” defined to include advocacy of homosexual activity. The trial court had attempted to save the law by applying it only to cases in which such conduct created “a material and substantial disruption,” but the circuit court did not go along.

Agreeing that the provisions of the state law permitting the firing of teachers who engaged in public homosexual conduct were permissible, the 10th Circuit dismissed challenges based on the equal protection and establishment clauses. It did not, however, believe that the provisions of the law punishing advocacy of homosexuality could survive facial challenge, because the law at issue was overbroad in punishing “pure speech.” Previous cases had permitted such suppression only where words called for the “incitement to imminent action” that was lacking here.

The 10th Circuit held that although the state “has interests in regulating the speech of teachers that differ from its interests in regulating the speech of the general citizenry,” these interests extended only to cases in which “the expression results in a material or substantial interference or disruption in the normal activities of the school.” This statute did not even confine its reach to statements made by teachers in the classroom.

The dissenting opinion in the 10th Circuit had expressed greater deference to the Oklahoma legislature and viewed sodomy as malum in se (inherently evil). Thus a “teacher advocating the practice of sodomy to school children is without First Amendment protection.” The dissenters found that the advocacy of homosexuality was substantially different from the wearing of black armbands that the Supreme Court upheld in Tinker v. Des Moines Independent Community School District (1969) and that the court’s opinion was a “bow to permissiveness.”

Moreover, the dissent said, the court should heed the language of Broadrick v. Oklahoma (1973) and recognize that “[f]acial overbreadth challenges are ‘manifestly strong medicine’ which must be employed ‘sparingly and only as a last resort.’ ”

The Supreme Court has subsequently struck down laws against private consensual sex between same-sex couples in Lawrence v. Texas, 539 U.S. 558 (2003) and state laws restricting marriage to heterosexual couples in Obergefell v. Hodges, 576 U.S. ____ (2015). The policies for which the National Gay Task Force were advocating would therefore no longer be illegal.