By Elizabeth R. Purdy
Other articles in Controversial Works 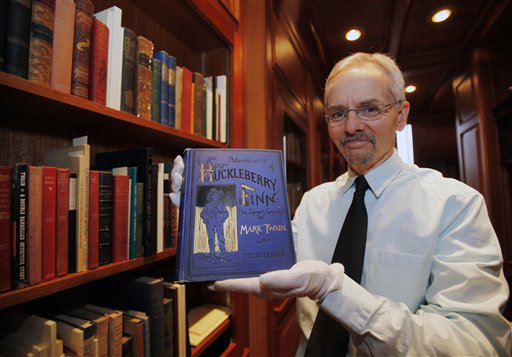 In this photo taken Feb. 23, 2010, Mark Woodhouse, Mark Twain archivist, holds a first edition "Adventures of Huckleberry Finn" book by Mark Twain at the Mark Twain Archive at Elmira College in Elmira, N.Y.  Immediately after the book was published, it was banned in Concord, Massachusetts, and has been banned several times since then from libraries because of what some viewed as inappropriate content. (AP Photo/David Duprey, used with permission from The Associated Press)

A 1907 article in the Library Journal reported that Mark Twain’s Adventures of Huckleberry Finn (1885) had been banned somewhere every year since its publication.

This novel, written by Samuel Clemens (1835–1910) under the pen name Mark Twain, chronicles the adventures of two young white boys and an escaped black slave who sail the Mississippi River on a raft.

Huck Finn, a rebellious teenager, fakes his own death to escape an alcoholic father and throughout the book challenges the mores of his society. Some Americans did not view Huck as a positive role model for young readers. Immediately after publication, the book was banned on the recommendation of public commissioners in Concord, Massachusetts, who described it as racist, coarse, trashy, inelegant, irreligious, obsolete, inaccurate, and mindless.

Two decades later, the New York Public Library banned Huck Finn from the children’s reading room because Huck scratched when he itched and said “sweat.” When informed of the censorship, Twain remarked that the controversy would only increase sales. Indeed, the book became a bestseller. By 1960 it had sold 10 million copies; more than forty different editions have been printed in the United States alone.

Although Twain’s Tom Sawyer initially overshadowed Huck Finn, most scholars have since come to consider the latter book Twain’s best work and one of the great American novels.

One early criticism of Huck Finn concerned Twain’s intentional use of bad grammar in the book. In general, the language is considered an accurate representation of that spoken by rural populations in the pre–Civil War South. Some critics accept Twain’s presentations as characteristic of the time portrayed but also believe that the effect of some of the racially charged language continues to contribute to negative racial stereotypes. Some feminists have disliked what they consider to be Twain’s negative, sexist portrayals of females in Huck Finn.

Alleged racist content has been the reason most often cited for banning or challenging Huck Finn, particularly since 1957 and the rise of the civil rights movement in the United States. From the beginning, however, some critics objected to Huck Finn’s “racial content.” Those critics note that Twain uses the word nigger 213 times in the book. Detractors have also objected to what they call Jim’s “childlike character” and maintain that he lacks credibility as an African American.

Huckleberry Finn has faced censorship in schools and libraries

Since the 1970s, the use of Huck Finn in schools and libraries has been challenged in a number of states. In 1988 a poster for Banned Books Week referred to these challenges by asking, “Would you call Huck Finn a racist?”

Twain supporters contend that the author was anything but racist and insist that the Adventures of Huckleberry Finn was a satire in which Twain sought to highlight the hypocrisy of the society in which he grew up. Defenders of the book also insist that Jim comes across as having more common sense and as being more talented than either Huck or his best friend, Tom Sawyer.

These critics suggest that overall the white characters are portrayed more negatively than black characters, citing the extreme piety of Miss Watson and the irresponsibility of Huck’s father as examples. Ironically, Huck Finn was conceived only after an earlier explicit exposé by Twain of slavery was censored. Twain responded by writing what he claimed was a satirical exposé of slavery, the Adventures of Huckleberry Finn.