By Carrie Archie Russell
Other articles in Controversial Works 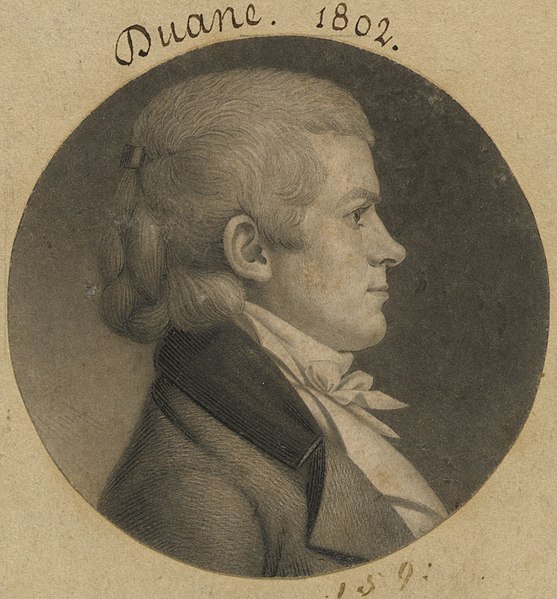 The book American Aurora illustrates the use of newspapers as partisan instruments in early U.S. history. The book uses the first person narrative of William Duane (editor of the Philadelphia Aurora, pictured here) to report the political battles waged between Federalists and Republicans at the end of the eighteenth century. The book shows the precariousness of First Amendment press freedom in early American history. (Image via Wikimedia Commons, public domain)

American Aurora, a book about the newspaper Philadelphis Aurora, a tool of the Democratic-Republican Party, illustrates the use of newspapers as partisan instruments in early U.S. history. The government’s response to such opposition in the Sedition Act of 1798 illustrates the precariousness of press freedom in the formative years of the republic.

Richard Rosenfeld offers some of the best insight into the American Aurora in his American Aurora—A Democratic Republican Returns—The Suppressed History of our Nation’s Beginnings and the Heroic Newspaper That Tried to Report It.

He uses the first person narrative of William Duane, assistant and successor to Benjamin Franklin Bache (founding editor of the Philadelphia Aurora and grandson of Benjamin Franklin) to report the political battles waged between Federalists and Republicans at the end of the eighteenth century.

Duane’s account sets the stage for the Sedition Act, Alexander Hamilton’s threat of war with France, and the election of Thomas Jefferson as the nation’s third president.

Through the use and arrangement of primary texts — newspaper articles and selected correspondence — Duane’s character presents the emboldened press as the site of exchange in the marketplace of ideas. Daily newspapers circulating throughout cities and towns tenaciously waged ideological battles for the hearts and minds of citizens. The Philadelphia Aurora and its rivals, the Gazette of the United States and the Porcupine Gazette, were primary vehicles for political communication, rallying cries for change in Philadelphia, the nation’s seat of government.

The Philadelphia Aurora represented Jeffersonian philosophy and the Philadelphia Democrats, who believed that the American Revolution had afforded citizens a unique historical opportunity to fully develop the rights of man, not only as active participants but as virtuous individuals.

Issue after issue of the Aurora devoted discussion to British history, to help readers understand the historical and economic development of the monarchy and aristocracy. The editors thereby reminded the newly enfranchised of the horrors of laboring as cogs in machinery operated by elites. The Aurora called for the politics of majority rule and reconstitution of the judiciary. Bache, Duane, and their colleagues sought to end the practice of judicial review and reliance upon English common law for the resolution of disputes among American citizens.

The Aurora struck fear in the heart of Philadelphia’s elite, especially the legal community, which perceived the call for the abolition of common law as advocating unbridled anarchy.

In response, the Sedition Act codified and implemented an effort to silence those who disagreed with Federalist Party leaders Alexander Hamilton and President John Adams. Authorities charged Bache with sedition, but he died before arraignment in the 1798 pandemic of yellow fever that swept Philadelphia.

Duane took up the call as editor of the Aurora, continuing to attack the Adams administration as elitist, but the Sedition Act successfully muzzled political dissidence and curbed the power of the majoritarian wing of the Jeffersonian Democrats.

The American Aurora serves as a historical reminder of the power of the press and the courage required to proffer alternative views in politically heated environments. The Sedition Act serves to remind of the fear that written words that challenge the status quo can excite among those who hold the seat of power and the lengths the powerful will go to in quelling its disposition.