The Birth of a Nation

By Clyde E. Willis
Other articles in Controversial Works 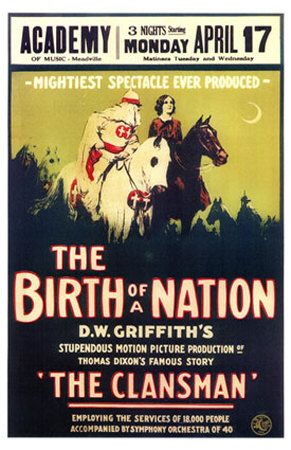 Poster for the American film The Birth of a Nation (1915) for a showing at the Academy of Music by Epoch Producing Co. The Birth of a Nation, perhaps one of the most controversial movies in U.S. history was met with both rousing approval and indignant condemnation. Attempts to block the film were common, but resistance to such efforts during the early part of the twentieth century were not brought under the First Amendment. (public domain).

The Birth of a Nation, perhaps one of the most controversial movies in U.S. history, premiered as The Clansman: An Historical Romance of the Ku Klux Klan in 1915 to be met with both rousing approval and indignant condemnation. Attempts to block the film were common, but resistance to such efforts during the early part of the twentieth century were not brought under the First Amendment. In fact, one of the first significant free speech cases did not appear until four years after the premiere—Schenck v. United States (1919). And it was not until the 1931 case of Near v. Minnesota that the Supreme Court considered the prior restraint concept in its First Amendment jurisprudence.

Film sparked the birth of the Second Klan

The film by producer and director D. W. Griffith was based on one volume of a racist trilogy written by former North Carolina Baptist minister Thomas Dixon Jr. ten years earlier. Depicting the Klan as a group of heroes “saving” the South from blacks and the “horrors” of Reconstruction,” the book, together with the film, sparked the birth of the so-called Second Klan. After the book’s and the movie-playbill’s portrayal of a hooded Klansman riding a hooded horse, with his left hand holding the reins of the horse and his right hand holding a burning cross above his head, the Klan, the movie, and cross burning became synonymous.

Efforts to censor Birth of a Nation were in large part blocked using technicalities or some other existing substantive law. For example, in Wallace v. MacDonough Theater Co. (Cal. App. 1917), the plaintiffs failed to show any possibility of specific harm or that they had standing to complain of a public nuisance. In Epoch Producing Corp. v. Schuettler (Ill. 1917), the attempt to censor was declared void by the trial court on the ground—not raised on appeal—that the obscenity ordinance was void for vagueness. Somewhat of an exception was Bainbridge v. Minneapolis (Minn. 1915), which involved a theater that violated the city’s censorship order. The theater was, however, denied relief for the post-showing revocation of its license because a revocation was deemed to be within the mayor’s discretion.

Not only were attempts to censor the film generally unsuccessful, but it actually won some acclaim within the film industry. The film was included in the National Film Registry in 1993 and voted one of the “Top 100 American Films” in 1998 by the American Film Institute.