By John R. Vile (updated 2018)
Other articles in Governmental Entities and Activities, Issues Related to Speech, Press, Assembly, or Petition 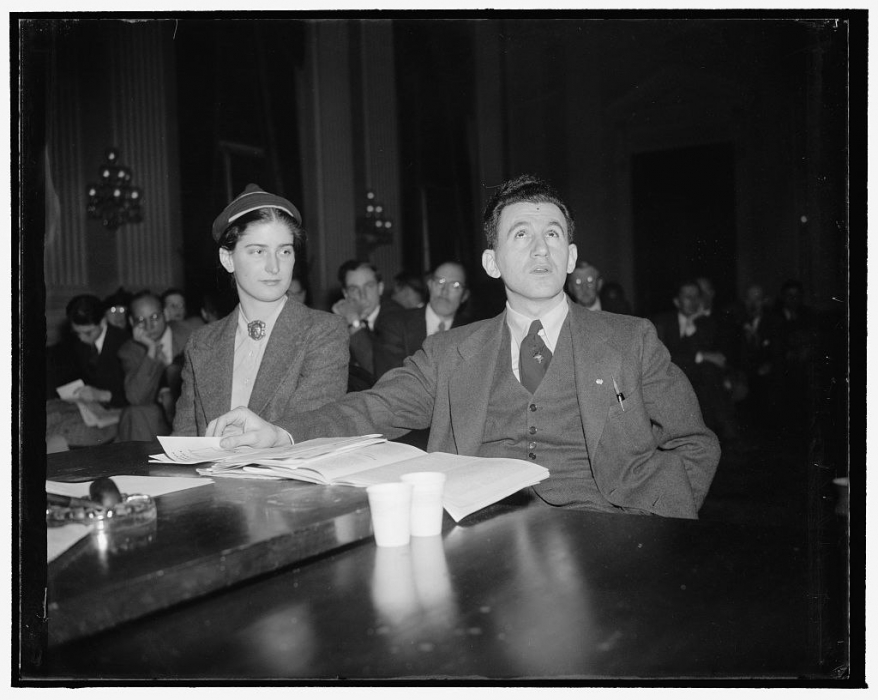 One of the most notorious ongoing congressional investigations was the work of the House Un-American Activities Committee that launched investigations into communist activity in the United States from the 1930s to the 1950s. The committee called people to testify and questioned them about their past beliefs and associations, leading the Supreme Court in 1957 to recognize the First Amendment right of an individual to refuse to answer questions about past associates that the committee had failed to establish as relevant. In this photo, Joseph P. Lash, Executive Secretary of the American Students' Union, and Miss Agnes Reynolds, College Secretary of the Union are being questioned by the committee in 1939. Lash told the committee that he had resigned from the Socialist Party. (Image via Library of Congress, public domain)

The framers of the U.S. Constitution did not explicitly grant the national legislature the power to conduct investigations, but in McGrain v. Daugherty (1927) the Supreme Court recognized this authority as an implied power that “has long been treated as an attribute of the power to legislate.”

Congress may also invoke the power in investigating the need to propose constitutional amendments.

The investigative power is broad, but the Court has over the years sought to restrain investigations interfering with the rights, including First Amendment rights, of those called before Congress in the course of an investigation.

Statements made by members of Congress during investigations are protected from legal action under the speech and debate clause, whereas individuals called before Congress can be cited for contempt and perjury in addition to suffering possible embarrassment as a result of information revealed by an investigation.

Wisconsin senator Joseph McCarthy was among those who during the Cold War abused their role as committee chairs in claiming to expose communists. Those called to testify were sometimes subsequently blacklisted by employers. McCarthy also provides an example of individuals who were exposed during investigations.

Court ruled on whether individuals had to answer about past associations

In the opinion for the Court in Watkins v. United States (1957), involving a charge of contempt of Congress, Chief Justice Earl Warren recognized the right of an individual to refuse to answer questions about past associates that the House Un-American Activities Committee had failed to establish as relevant.

The Court appeared to step back from this decision in Barenblatt v. United States (1959), deciding in this case to reject broader First Amendment claims by a college professor about inquiries into his past beliefs and associations.

Justice Hugo L. Black authored a dissent objecting to the Court’s “balancing” approach and questioning whether the Court had adequately weighed First Amendment rights. Black cited “the interest of the people as a whole in being able to join organizations, advocate causes and make political ‘mistakes’ without later being subjected to governmental penalties for having dared to think for themselves.”

He further likened the embarrassment to which such investigations could expose individuals to “the pillory, ostracism and subjection to public hatred.” In a separate dissent, Justice William J. Brennan Jr. argued that “no purpose for the investigation of Barenblatt is revealed by the record except exposure purely for the sake of exposure.”

In Gibson v. Florida Legislative Investigation Committee (1963), the Court held that state legislative investigations were also subject to First Amendment limitations, including protections for the rights of speech and association. It thus ruled that a witness could refuse to disclose the membership lists of the National Association for the Advancement of Colored People.

Congressional investigations can be quite consequential.  Investigations of President Richard Nixon during the Watergate hearings exposed the existence of Nixon’s secret taping of White House conversations.  After Nixon lost a fight with the special prosecutor to prevent their dissemination under the executive privilege doctrine, the testimony they revealed was sufficient, with other evidence, to lead the prosecutor to list Nixon as an “unindicted co-conspirator” and for the House of Representatives to draw up articles of impeachment against President Nixon that ultimately led to his resignation.

In 2017, Congress began investigating whether President Donald Trump had fired FBI director James Comey out of fears that he was investigating possible ties between Russian intervention in the U.S. presidential election and members of Trump’s campaign staff.  Although some public officials refused to testify about their private conversations with the president, former director Comey testified about his meetings with President Trump  while deferring issues that might involve confidential information to private hearings.