By First Amendment Encyclopedia
Other articles in Governmental Entities and Activities 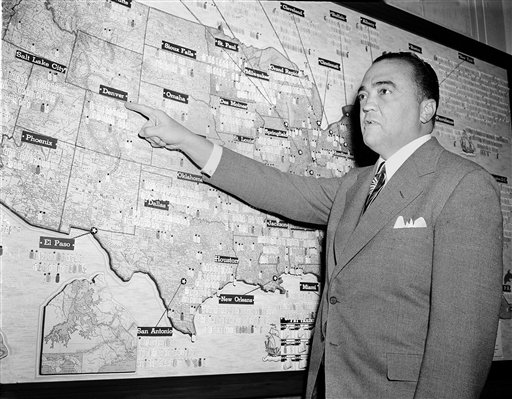 J. Edgar G. Hoover, pictured here in 1942, directed the FBI from 1924 to 1972. During much of this time, the FBI operated with little oversight by Congress or the Justice Department. Critics have said the FBI's surveillance of citizens has chilled political speech. A Senate committee in 1976 concluded that the FBI's infiltration and surveillance of civil rights and labor groups was a "sophisticated vigilante program" aimed at undermining the First Amendment. (AP Photo, used with permission from the Associated Press)

The Federal Bureau of Investigation (FBI) was created in 1908 as an arm of the U.S. Department of Justice, although it didn't get its present name until 1933.

Its long history of covert surveillance of radicals and dissidents has caused considerable controversy about infringement on First Amendment rights of speech, press, association, and assembly. Some have dubbed such surveillance of otherwise lawful speech as “official repression” and “political policing.”

The FBI began keeping records on so-called subversives during the first "Red Scare" from 1917 to 1920 when U.S. law enforcement officials arrested several thousand citizens and immigrants for their political activities. By the early 1920s, an estimated 450,000 Americans were listed in the FBI’s political files.

As the nation emerged as a leading industrial and world power, spying on Americans became an institutional feature of U.S. politics. Nearly 1 million intelligence investigations were opened on Americans during the COINTELPRO (Counter Intelligence Program) era from 1956 to 1971, representing one of the greatest abuse of constitutional rights by the FBI. Under J. Edgar Hoover’s leadership (1924-1972), the FBI operated with virtually no oversight by Congress or the Justice Department.

Hoover supplied political leaders and the media with information from secret files to fight movements spawned by civil rights, trade unions, and anti-war groups. The bureau tried to weaken and silence political entities it disliked, restricting the free expression of ideas and taking a leading role in promoting anti-communism. Secrecy was so paramount that for many years the bureau maintained a special “Do Not File” records system that remained unknown to outsiders.

In 1976 the Senate’s Church Committee (named after its chair, Sen. Frank D. Church of Idaho) concluded that COINTELPRO was a “sophisticated vigilante program” aimed at undermining the First Amendment.

The bureau wiretapped phones and opened mail without warrants, and it placed more than 50,000 human informers or infiltrators inside political groups. For example, by the 1960s the bureau had recruited an estimated 5–10 percent of the membership of the Communist Party of the United States to supply information about meetings, finances, literature, and organizing. In some organizations, informers rose to positions of leadership, affecting the content of speech, and some became provocateurs to discredit groups.

Overall, the bureau admitted to about 2,300 covert disruptive acts conducted against Americans, including initiating warrantless break-ins, mailing anonymous and forged letters, spreading misinformation, and disrupting the growth of organizations. In a few cases, the FBI helped to falsely arrest subjects.

For example, Black Panther Party leaders Geronimo ji Jaga (Pratt) and Dhoruba Bin Wahad spent many years in prison before being exonerated. They later sued the FBI and won substantial damage awards. Other victims of COINTELPRO used the Freedom of Information Act (1966) to obtain declassified copies of their FBI files.

After the reform of the intelligence community in the late 1970s, the FBI shifted the hunt for subversives to the hunt for terrorists. The definition of domestic terrorists expanded over time to include peaceful protestors of many different backgrounds. The FBI monitored the left far more than the right, reflecting a political bias, but spying on Americans was conducted under both Democratic and Republican presidents.

President Jimmy Carter reacted to the abuses of Watergate by trying to rein in the bureau, but President Ronald Reagan revived aggressive investigations in the 1980s of the nuclear freeze movement and of opponents of U.S. policy toward Nicaragua and El Salvador.

After the bombing of the Murrah Federal Building in Oklahoma City in 1995, the FBI vastly increased its investigation of right-wing groups. Another dramatic increase in spying occurred after the Sept. 11, 2001, al-Qaida attacks on the United States. As the war on terrorism became the No. 1 law enforcement priority, surveillance of communications was extended to the telephone, mail, fax, computers, and the Internet.

In 2005, more than 270,000 people were listed in an FBI database on terrorism, including a large number associated with domestic groups, such as radical environmentalists, neo-Nazi white supremacists, Islamic groups, and Arab-American religious and political organizations.

Despite the expansion of protected political speech during the past 50 years, FBI monitoring of political expression has continued. Political policing can undermine the First Amendment, chilling political speech and damaging the democratic deliberative process.

When the bureau photographs or videos the participants in protests and demonstrations, conducts official interviews to intimidate activists or calls them before grand juries, it may deter legal free expression as well as illegal actions.

Aided by the USA Patriot Act of 2001, the FBI continues to upset civil libertarians and others in its conduct of terrorism-related investigations because one can become a “person of interest” merely by associating with the subject of an investigation. For example, the FBI has investigated Americans who subscribe to radical newspapers and has even been known to seek the library records and inspect the books that suspects read. It can open an investigation on a group based on the speech of only one of its members.

Because the threshold used to monitor suspects has remained low, the FBI has amassed large files on such critics as the American Civil Liberties Union. Congressional oversight has often lagged because of the FBI’s refusal to open its secret files for scrutiny.

In 2010, FBI Director Eric Holder won a decision in Holder v. Humanitarian Law Project, 561 U.S. 1, upholding a federal law that prohibited the provision of “material support or resources” to certain designated terrorist groups against charges that it was overly vague. The Court also ruled that it primarily regulated conduct rather than speech and that it was not directed at First Amendment rights of association per se, but with the provision of “material support.”

This article was first published in 2009 and was last updated in 2020.