By Brian Caterino
Other articles in Governmental Entities and Activities 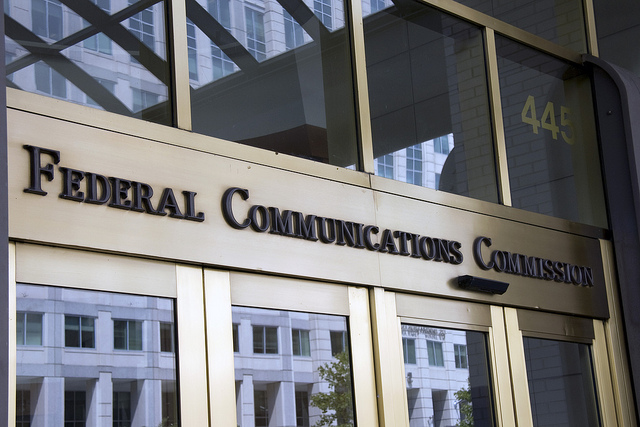 The Federal Communications Commission was established in 1934 and through its regulation of content carriers, such as broadcast media, has had significant impact on questions of First Amendment freedom. It remains in the middle of controversies on Internet neutrality. (AP Photo/Andrew Harnik, used with permission from the Associated Press)

The Federal Communications Commission (FCC) is an independent regulatory government agency established by the Communications Act of 1934. The act created a seven-person board (reduced to five in 1983) charged with developing and regulating a rapid, efficient, nationwide communications system.

Communications Act of 1934 brought together common and content carriers

Common carriers were a neutral means of transporting individuals or information. These “natural monopolies” benefited the public by providing inexpensive, universal service. The broadcast media, primarily radio and later television and cable, were seen not only as content carriers, but also, because of the nature of the airwaves (like public property such as water), as embodying a public interest.

However, the scarcity of frequencies led to a monopoly-like condition that required regulation.

In the ambiguous language of the 1934 act, the FCC could regulate in the “public interest, necessity, and convenience.” The FCC has had a significant impact on questions of freedom through regulation of the media.

After an era of regulation of monopolies and quasi monopolies, the FCC changed gears during the Reagan administration to become a conduit for deregulation of both common carriers and the broadcast media.

During the early years of the FCC, it largely limited its regulation of telephone services to profits. In time, however, the agency began to promote competition. In 1982 the telephone company MCI successfully challenged AT&T’s monopoly. The courts ruled that there was no compelling public interest in a long-distance monopoly.

The onset of this deregulatory mood led to the breakup of AT&T into eight separate companies in 1984.

FCC has been given broad power to regulate the broadcast media

Because communications frequencies are scarce and the airways are public by nature, the FCC has been given (and has taken) some broad powers in regulating the broadcast media.

In its early years, the FCC enforced limits on ownership, chain broadcasting, and content regulation. Among other things, it ordered the breakup of the NBC Blue radio network because of excessive monopoly control. In National Broadcasting Co. v. United States (1943), the Supreme Court upheld the breakup and ruled that, because of the scarcity of frequencies, the FCC could regulate broadcasting in the “public interest, convenience, and necessity.”

The regulation of ownership has, however, loosened in recent years, because the FCC, in a deregulatory mood, has allowed concentration of station ownership.

The Telecommunications Act of 1996 raised the limits on station ownership and in several amendments since increased the limits and loosened the rules on media cross-ownership. However, these developments have not been without controversy. Consumer and other interest groups have protested that the increasing corporate concentration of power violates the public interest and excludes minorities from ownership.

In October 2006, it was revealed that the FCC’s own report showing decreased ownership by minorities and women stemming from the concentration had been suppressed.

Content regulation has also been justified through the “public interest, convenience and necessity” clause. The FCC’s so-called fairness doctrine required broadcasters, as a condition of monopoly over frequencies, to provide programming in the public interest, to discuss controversial issues, and to give time to opponents for prevailing views.

Some critics contend that the FCC has fallen short on content regulation. Driven by commercial interests, it often has failed adequately to insist on the presentation of diverse viewpoints. By contrast, free-market champions often argue that FCC regulation stifles diversity by restricting competition.

The fairness doctrine was challenged in 1969 in Red Lion Broadcasting Co. v. Federal Communications Commission, but it was upheld on the grounds of frequency scarcity. However, in 1984, during the deregulatory era, the FCC held that scarcity was no longer a consideration, and it formally abolished the doctrine in 1987.

Other arenas for public interest programming are the Public Broadcasting System (PBS) and public access. PBS has been hampered both by conservative critics who decry its “liberal” bias and by its capture by corporate sponsors who eschew any large-scale criticism of existing social arrangements. Indecent or obscene speech has been an important regulatory content issue.

The freedom of expression promised in the First Amendment has been limited by the proliferation of television and radio outlets accessible by young children. During the 1960s and 1970s, fraught with cultural change, obscene speech became an issue on radio and television, culminating in the decision in Federal Communications Commission v. Pacifica Foundation (1978) that allowed the FCC to limit the broadcasting of indecent speech—namely comedian George Carlin’s skit, “Seven Words You Can Never Say on Television.” In recent years, as the cultural climate has become more conservative, enforcement has increased.

Indeed, although the FCC has always played a role in the cultural conflicts of its time, it has been an important player in the so-called culture wars since the 1980s. The year 2004 was a high mark in fines, beginning with the singer Janet Jackson’s “wardrobe malfunction” and continuing concerns about shock jocks such as Howard Stern.

There have been attempts to regulate programming include the family hour, the voluntary ratings system, and children’s programming requirements. In 2005 Congress passed the Broadcast Decency Enforcement Act, which empowered the FCC to increase fines for indecent programming tenfold. The FCC’s power to regulate indecent programming continues to engender controversy, as the agency faces off against CBS and other media entities in high-profile First Amendment lawsuits.

As Congress considered legislation in 2006 allowing telephone companies to offer cable broadband services and to limit or eliminate local franchising, the FCC remained in the middle of controversies on Internet neutrality and the nature of public-interest obligations in a deregulated environment.