By Kane Madison Click
Other articles in Governmental Entities and Activities 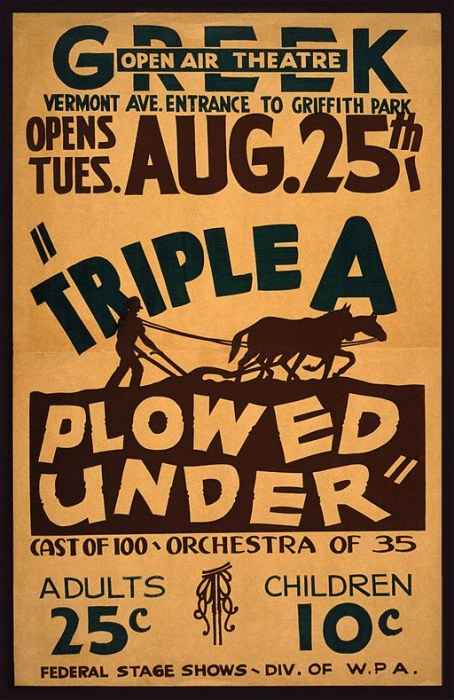 In the 1930s, Federal Theatre Project productions, while aiming to be uncensored and noncommercial, often proved to be controversial. One of these projects, “Triple-A Plowed Under,” advertised in the 1936 poster above, came under intense scrutiny for its portrayal of a Court ruling that declared the Agricultural Adjustment Act unconstitutional. The short-lived government agency that some thought had unpatriotic programs was censored and later abolished in 1939. (Image via Library of Congress, public domain)

The Federal Theatre Project (FTP) provided Depression-era families with inexpensive entertainment and out-of-work directors, actors, and writers with employment. It was established in August 1935 as one of five Federal One projects of the Works Progress Administration (WPA), which arose out of the New Deal.

In 1938 the FTP came under investigation by the Dies Committee — later the House Un-American Activities Committee (HUAC) — for suspected communist infiltration. This investigation, coupled with various congressional protestations against FTP productions, led to cancellation of the project’s funding in 1939.

Harry Hopkins, head of the WPA, had selected Vassar theatre professor Hallie Flanagan to serve as the first chair of the FTP. Hopkins declared that the FTP would commission productions that were “free, adult, and uncensored” (O’Connor and Brown 1978: 2). The goal was to create a noncommercial American theatre in the strictest sense — that is, the profits, Hopkins proclaimed, “won’t be money profits.”

Acting on the utopian proclamations of both Hopkins and Flanagan, FTP directors initially approved for production all projects, regardless of their social or political content.

A frequent FTP production was the “living newspaper,” designed by Flanagan. These productions were based on subjects literally clipped from newspapers, but despite their popularity among audiences, they drew criticism from Congress.

The first censored FTP production was the 1936 play Ethiopia about that country’s struggle against Italian invaders. Triple-A Plowed Under, which detailed the Supreme Court’s declaration in United States v. Butler (1936) that the Agricultural Adjustment Act (AAA) was unconstitutional, also came under intense scrutiny.

The Federal Theatre Veterans’ League, a watchdog group designed to combat radicals in the FTP, declared the production “unpatriotic” and threatened to have the cast and crew arrested. In 1937 “budget cuts” forced the cancellation of the controversial musical The Cradle Will Rock. The production, about a mining company’s attempt to crush a labor union, garnered intense criticism — and subsequent censorship —  from Congress.

FTP was investigated for communist infiltration

On July 26, 1938, Rep. J. Parnell Thomas, R-N.J., associated the FTP not only with communism but identified it as “one more link in the vast and unparalleled New Deal propaganda machine” (Mathews 1967: 199). Thomas pledged to have the FTP investigated as soon as the newly formed House Un-American Activities Committee began hearings.

On Dec. 6, 1938, Hallie Flanagan became the first person to testify before the Dies Committee. After an investigation, the Dies Committee came to the same conclusion as Thomas, and funding for the FTP ceased on June 20, 1939.

FTP served as start for prominent Americans in theater

Despite the historic turmoil surrounding the FTP, it served as a start for various later prominent American directors, producers, and actors such as actor John Houseman, producer and director Elia Kazan, playwright Arthur Miller, and actor and director Orson Welles.

This article was originally published in 2009 while Kane M. Click was at University of Nebraska-Lincoln.