By Emilie S. Kraft
Other articles in Controversial Works 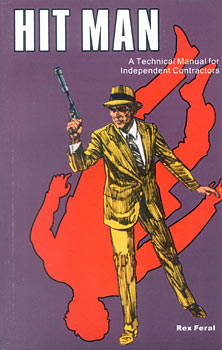 Cover of the 1983 book Hit Man: A Technical Manual for Independent Contractors published by Paladin Press, a how-to guide for those seeking to pursue a career as murderers for hire. The book was involved in a First Amendment case in which a circuit court said the First Amendment did not protect the book. (Photo courtesy of Wikipedia via fair use)

As the title suggests, the book Hit Man: A Technical Manual for Independent Contractors is a how-to guide for those seeking to pursue a career as murderers for hire. It was written by Rex Feral, a pseudonym some believe belongs to a Florida woman, who originally wrote the book as a crime novel. The book was published by Paladin Press in 1983 and sold approximately 13,000 copies while it was on the market. It became the subject of two suits in federal court, both with First Amendment implications.

In 1993 James Perry murdered Mildred Horn; her eight-year-old son, Trevor, who was a quadriplegic; and Janice Saunders, Trevor’s nurse. Lawrence Horn, Mildred Horn’s ex-husband and Trevor’s father, had hired Perry to commit the murders with the expectation of inheriting the $2 million that Trevor received as a settlement for injuries. Perry, who had purchased a copy of Hit Man, executed the crime “by the book,” following its instructions to arrange his contract with Horn, select a weapon, construct a homemade silencer, and dispose of the bodies.

Publisher of manual viewed as aid in murder

The victims’ survivors filed a wrongful death action against Paladin Press in a Maryland federal court, alleging that the publisher had aided and abetted the murderer. The plaintiffs in the Maryland case were represented by Rodney A. Smolla, a First Amendment scholar.

Paladin stipulated that it intended the book to be used by criminals and would-be criminals and that it intended and had knowledge that the book would be used to execute the crime of murder for hire. Thus, the only issue was whether the First Amendment acted as a complete bar to the plaintiffs’ claims. The district court, using its interpretation of the Supreme Court’s opinion in Brandenburg v. Ohio (1969), held that the First Amendment barred the claims and entitled the publisher to immunity because Hit Man “merely advocates or teaches murder” and does not “incite or encourage” it.

The Fourth Circuit Court of Appeals reversed the lower court’s decision in Rice v. Paladin Enterprises, Inc. (4th Cir. 1997), stating that the district court had misinterpreted Brandenburg, a seminal decision in which the Supreme Court held that “the mere abstract teaching ... of the moral propriety or even moral necessity for a resort to force and violence” is protected under the First Amendment, while actually “preparing” people for “imminent lawless action” is not protected speech.

The Fourth Circuit held that Hit Man fell within the latter category of speech, and consequently the First Amendment did not provide a bar to civil liability for aiding and abetting. The court cited a number of criminal aiding and abetting cases to support its reasoning. Many First Amendment advocacy groups, several of which wrote amicus curiae briefs on behalf of Paladin, criticized the decision as being inimical to freedom of speech.

Paladin was also sued in an Oregon federal court, in 2001, by the victims of an attempted contract murder for aiding and abetting and for conspiracy to commit murder. Like the Fourth Circuit, the Oregon court allowed the claims to go forward. The court held that although Paladin did not make the same stipulations that it did in Rice, it was clear from the book’s content and marketing that the publisher intended the book to be used in the commission of such crimes.

Both the Maryland and Oregon plaintiffs settled out of court with Paladin’s insurance company. Paladin agreed to stop selling the book as part of the Rice settlement, although used copies are still widely available on the Internet.