By Howard Leib
Other articles in Controversial Works 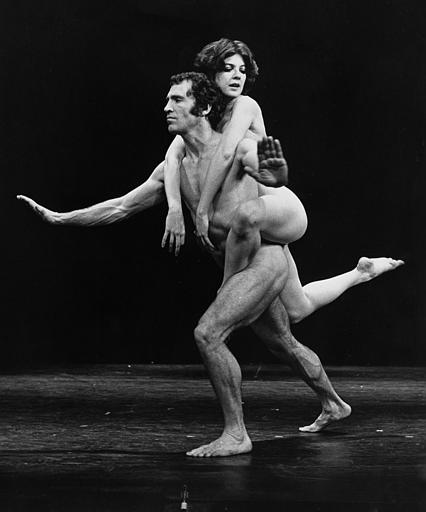 Derided by critics, excoriated by censors, but enjoyed by audiences, Oh! Calcutta! opened on Broadway on June 17, 1969,and closed on August 12, 1972. After its revival in 1976, it ran until 1989, logging a breathtaking 5,959 Broadway performances. The play inflamed some public officials, leading to censorship and First Amendment arguments.

The show was the brainchild of critic and social observer Kenneth Tynan. It featured the work of Samuel Beckett, Jules Feiffer, John Lennon, Sam Shepard, and Peter Schickele, among others.

Whereas the play Hair was a work of political and social theater that included nudity, Oh! Calcutta! was intended as a light review centering on sex and eroticism. It was the first Broadway show to display full frontal nudity, but its goal was more to entertain than to stimulate thought or discussion. In his review of the original production of the show, Clive Barnes wrote for the New York Times: “There is no more innocent show in town—and certainly none more witless— than this little diversion.”

The play was banned in many cities, but enjoyed immense popularity

Barnes’s depiction of the inherent innocence of Oh! Calcutta! was not shared by all. The New York Daily News called the show “hard-core pornography.” Many cities, including Chattanooga and Cincinnati, even banned the show, and it was shut down by the Los Angeles vice squad after a single performance. Overseas, productions were banned in Australia but permitted in Israel in 1986 with the nudity intact (the producers did, however, tone down some of the play’s sexual content). Oh! Calcutta! also enjoyed long and successful runs in England and France. Despite its problems with censors, by 1987 Oh! Calcutta! had played in more than 250 cities worldwide and grossed $260 million. At home, Oh! Calcutta! was briefly the longest running show on Broadway.

Films of the performance were also censored

The play’s difficulties with censorship were not limited to the theatrical stage. In 1970 a performance of the show was videotaped at the off-Broadway Eden Theatre. The producer intended to show the video on a pay-per-view basis at movie theaters around the country. Although he made arrangements with about 250 theaters for such a showing, the producer was able to exhibit the video in only fifty theaters because of censorship issues. This filmed performance was released on video and later on DVD.

Ultimately, time and the mores of the day overtook Oh! Calcutta! In its later years, the show’s audience was made up primarily of foreign tourists seeking to participate in a piece of Broadway history. On opening night, creator Tynan told reporters that he was not “trying to make a revolution,” but Oh! Calcutta! did open farther the door cracked by Hair, and broke the path for the use of full nudity in future shows.