By Martin Gruberg
Other articles in Governmental Entities and Activities 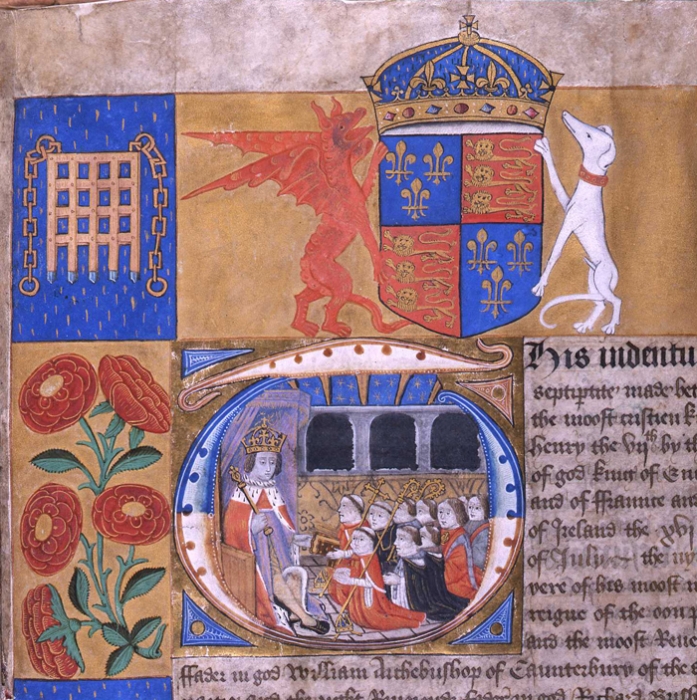 A document of 1504 showing King Henry VII sitting in the Star Chamber. Star chambers, named after the room in which the court met in Westminster Palace, had their origins in England where they were used to try people too powerful to be brought before oridinary common law courts. Their jurisdiction included forgery, perjury, riots, libel and conspiracy. Parliament abolished them in 1641.

The term star chamber refers pejoratively to any secret or closed meeting held by a judicial or executive body, or to a court proceeding that seems grossly unfair or that is used to persecute an individual.

In Richmond Newspapers Inc. v. Virginia (1980), the Supreme Court cited the First Amendment to support the right of the public and members of the news media to attend criminal trials.

The Star Chamber has its origins in the English institution of the same name that tried people too powerful to be brought before the ordinary common-law courts; the fear was corruption.

From the Middle Ages, the Star Chamber consisted of a committee of the English king’s council. It was reorganized in 1487 under King Henry VII, so that it was composed of four high officers of state, with the power to add to their number a bishop, a temporal lord of the council, and two justices of the court of Westminster. Henry VIII’s chancellor and cardinal Thomas Wolsey encouraged plaintiffs to appeal first to the Star Chamber before filing in the ordinary courts.

The jurisdiction of the Star Chamber included forgery, perjury, riots, maintenance, fraud, libel, and conspiracy. It could impose fines, whipping, the pillory, prison sentences, and mutilation, but it could not impose the death penalty. The Star Chamber received its name from the room in which it met in Westminster Palace — a room in which stars were painted on the ceiling.

At first, the court was popular for protecting ordinary people from their oppressors. But eventually it abused its powers, using torture to obtain confessions. Jurors were punished for finding verdicts against the Crown.

Parliament abolished the Star Chamber in 1641 after abuses of power

King Charles I used the Star Chamber to crush opposition to his policies. In 1641 the Long Parliament abolished the court.

In People v. Croswell (N.Y.1804), Justice James Kent dismissed numerous English precedents from the Star Chamber in presenting his view that laws against seditious libel should allow jurors to make decisions about matters of both law and fact and allow defendants to plead truth as a defense.