By John R. Vile
Other articles in Legal Terms and Concepts Related to Religion 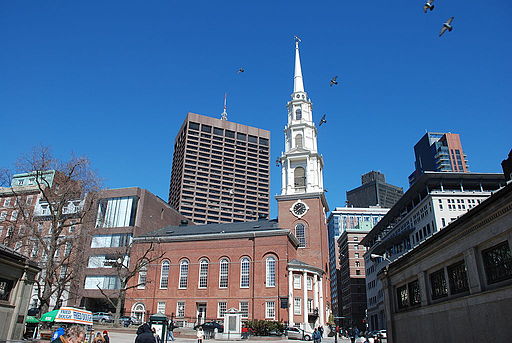 Chief Justice Warren E. Burger used the term "benevolent neutrality" in Walz v. Tax Commission (1970) in upholding a property tax exemption that had been extended to non-profit groups, including churches. The notion that the government can exercise “benevolent neutrality” toward religion attempts to combine the idea of neutrality and accommodationism. (Photo of Park Street Church in Boston, via Wikimedia Commons, CC BY-SA 3.0)

One of the challenges of interpreting the two religion clauses of the First Amendment — the free exercise clause and the establishment clause — is ensuring that they complement, not contradict, one another.

Justices and scholars have formulated a variety of standards with this objective in mind. Many have called for neutrality, or nonpreferentialism, in the state’s dealings with religion. This standard is, in part, reflected in the endorsement test advocated by Justice Sandra Day O’Connor to ensure that government actions do not treat believers or unbelievers as outsiders.

From time to time, scholars and others attempt to combine one or another approach. For example, the notion that the government can exercise “benevolent neutrality” toward religion attempts to combine the ideas of neutrality and accommodationism. Chief Justice Warren E. Burger used this term in Walz v. Tax Commission (1970) in upholding the property-tax exemption that a city had extended to nonprofit groups, including churches. Burger observed:

"The course of constitutionality neutrality in this area cannot be an absolutely straight line; rigidity could well defeat the basic purpose of these provisions, which is to insure that no religion be sponsored or favored, none commanded, and none inhibited. The general principle deducible from the First Amendment and all that has been said by the Court is this: that we will not tolerate either governmentally established religion or governmental interference with religion. Short of those expressly proscribed governmental acts there is room for play in the joints productive of a benevolent neutrality which will permit religious exercise to exist without sponsorship and without interference."

Although Justice William O. Douglas dissented in this case, he had himself taken a similar stance in Zorach v. Clausen (1952), in which he approved of a New York program that released children from school to attend religious instruction off campus. In that case, Douglas had opined:

"We are a religious people whose institutions presuppose a Supreme Being. We guarantee the freedom to worship as one chooses. We make room for as wide a variety of beliefs and creeds as the spiritual needs of man deem necessary. We sponsor an attitude on the part of government that shows no partiality to any one group and that lets each flourish according to the zeal of its adherents and the appeal of its dogma. When the state encourages religious instruction or cooperates with religious authorities by adjusting the schedule of public events to sectarian needs, it follows the best of our traditions. For it then respects the religious nature of our people and accommodates the public service to their spiritual needs. To hold that it may not would be to find in the Constitution a requirement that the government show a callous indifference to religious groups. That would be preferring those who believe in no religion over those who do believe."

Scholars have called on courts to advance benevolent neutrality

Focusing on such statements, Stephen V. Monsma has written a book calling on courts to advance “positive neutrality.” Similarly, scholars Stephen L. Carter, Michael McConnell, and Frank Guliuzza III have stressed the need for governments to balance the idea of separation of church and state with the need to extend positive protection to religious expression and exercise.

Both school vouchers for students attending either secular or parochial schools and government support of faith-based initiatives might be considered forms of benevolent neutrality.