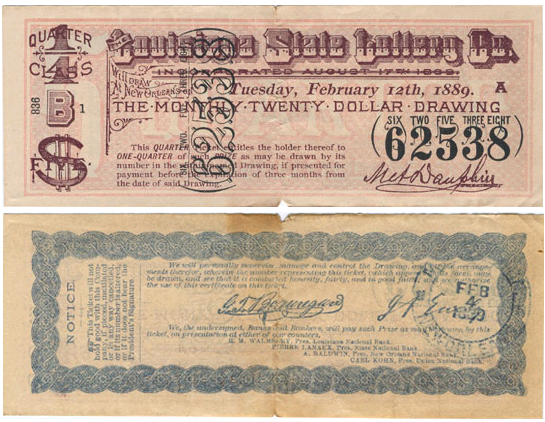 A Louisiana state lottery ticket from 1889. The Louisiana lottery was involved In re Rapier (1892), when two men were arrested for breaking a federal statute by mailing a newspaper and letter that advertised the Louisiana lottery. The Supreme Court upheld the law. (Public domain.)

In In re Rapier, 143 U.S. 110 (1892), the Supreme Court affirmed the legality of revised federal statutes prohibiting the use of the U.S. mails to send lottery cards or any publications advertising lotteries, holding that the prohibitions do not violate the First Amendment freedom of the press.

Rapier and co-defendant Dupre had been arrested for mailing a newspaper and a letter containing an advertisement for the Louisiana lottery in violation of federal laws limiting the use of the mail for such purposes. In attempting to defend Rapier, his attorney had raised a number of objections, most focusing specifically on freedom of the press and relying fairly heavily on arguments on behalf of such freedom that Alexander Hamilton had made in People v. Croswell (N.Y. 1804).

Writing an opinion that had been initially assigned to Justice Joseph Bradley (who had since died), Chief Justice Melville W. Fuller largely affirmed the decision in Ex parte Jackson (1877), on which he also relied. He argued that while the chief purpose of the provision granting Congress power over the mail had been “to furnish mail facilities for the people of the United States,” such facilities need not be “furnished for every purpose.” Fuller rejected the defense’s idea that Congress could prohibit that which was mala in se (bad in and of itself) as opposed to that which was mala prohibita (illegal only because it was prohibited). If such a distinction existed, it would be up to Congress to specify what fell within each category. Fuller further said that there was no “fundamental right” to operate a lottery.

Addressing First Amendment concerns, Fuller opined: “The freedom of communication is not abridged . . .unless Congress is absolutely destitute of any discretion as to what shall or shall not be carried in the mails, and compelled arbitrarily to assist in the dissemination of matters condemned by its judgment, through the governmental agencies which it controls.” Accordingly, Congress’s exercise of its constitutional power to establish post offices did not abridge freedom of the press.