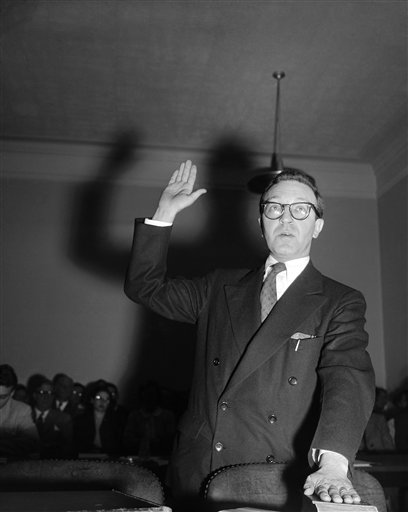 In Connell v. Higginbotham 403 U.S. 207 (1971), the Supreme Court struck down as a violation of the First Amendment one of two loyalty oaths that Florida employees, in this case a substitute teacher, had been required to affirm. The stuck-down oath required teachers to say they didn’t believe in the violent overthrow of the government. In this unrelated photo, Abraham Glasser, Rutgers University teacher, swears to tell the truth before the House Un-American Activities Committee on March 12, 1953 in Washington, using his family Bible at his request. (AP Photo/William Allen, used with permission from the Associated Press)

In Connell v. Higginbotham 403 U.S. 207 (1971), the Supreme Court struck down as a violation of the First Amendment one of two oaths that Florida employees, in this case a substitute teacher, had been required to affirm.

A federal district court had already invalidated a section of the oath requiring individuals to affirm that they were not members of the Communist Party, would not lend it aid or support, and did not belong to any organization that believed in or taught the violent overthrow of the government. The court had upheld a provision providing that employees swear to support the state and federal constitutions and another specifying that they did not believe in the violent overthrow of either government by force or violence.

The Supreme Court’s per curiam opinion affirmed that existing cases settled the constitutionality of the first of these two remaining provisions relative to support of state and federal constitutions. But the Court asserted that an employee could not be dismissed for refusing to swear to the second part, relative to belief respecting the violent overthrow of the government, without the due process that a hearing would have provided.

Marshall: State cannot fire someone for their beliefs

In a concurring opinion joined by Justices William O. Douglas and William J. Brennan Jr., Justice Thurgood Marshall agreed that the provision concerning the support of state and federal constitutions was the type of “forward-looking, promissory oath” that “does not . . . offend” the First Amendment.

Even if a hearing were provided, however, he did not believe that the state should be able to fire someone for their beliefs.

Justice Potter Stewart’s dissent agreed that the provision calling for support of the state and national governments was constitutional but thought that the Court should remand the case to the district court to give authoritative meaning to the provision relative to beliefs about the violent overthrow of government before striking it down.