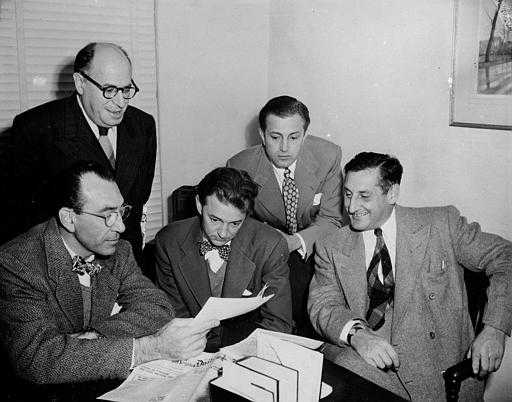 Loyalty oaths in the 1940s and 50s were a way to root out Communist sympathies. In this 1947 photo, five movie writers suspended from their jobs when they did not sign oaths denying they were Communists gather in Los Angeles to draft their response. Local governments also had loyalty oaths for employees, and in 1951, the Supreme Court upheld the constitutionality of the city of Los Angeles’s oath in Garner v. Board of Public Works of Los Angeles (Photo by the Associated Press of (L-R) Herbert Biberman, Samuel Ornitz (standing), Adrian Scott, Edward Dmytryk, and John Howard Lawson. Reprinted with permission from The Associated Press.)

In Garner v. Board of Public Works of Los Angeles, 341 U.S. 716 (1951), the Supreme Court upheld the constitutionality of a loyalty oath and an accompanying affidavit required of City of Los Angeles employees.

The oath in question required that employees affirm that they did not then “advise, advocate or teach” or belong to organizations that taught the forceful overthrow of the U.S. government and that they had not for the last five years. Some employees charged the oath violated several constitutional provisions, including First Amendment protections of freedom of speech and association.

Because the city had adopted a similar ordinance that applied five years previously, Justice Tom C. Clark, joined by four other justices, denied that the law was an ex post facto, or retroactive, criminal law. He argued that it was not a bill of attainder—a legislative, rather than a judicial punishment— because it related to professional standards of employment rather than being chiefly punitive in nature. Clark further saved the oath from impermissibly impinging on freedom of speech and association by reading it so that it only applied to employees who knew of subversive activites of their organizations.

This Garner ruling resembled contemporary decisions in Adler v. Board of Education (1952) and Wieman v. Updegraff (1952) in upholding oaths only when it is clear that employees understand that they apply only to those who know their groups advocate violent overthrow of the government.