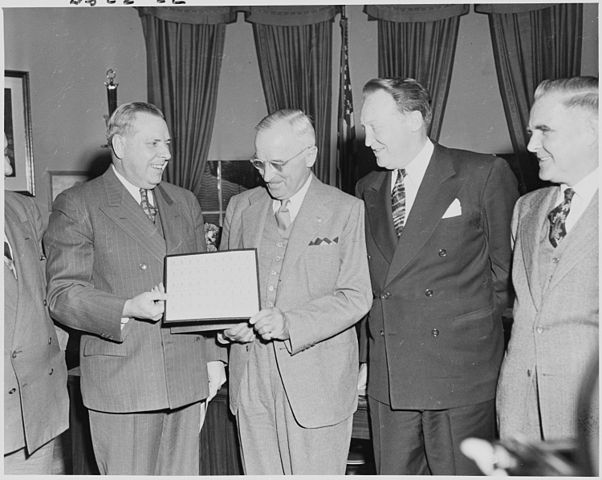 In Donaldson v. Read Magazine, 333 U.S. 178 (1948), the Supreme Court ruled that the First Amendment does not protect ordinary crime and that the postmaster general, at this time Jesse Donaldson, may deny the use of the mails to persons in order to prevent fraud. Photograph of President Truman in the Oval Office receiving a sheet of the new Freedom Stamps, issued in honor of the Sesquicentennial of Washington, D.C., from Donaldson, as other dignitaries look on on April 20, 1950. (Image via National Archives, public domain)

In Donaldson v. Read Magazine, 333 U.S. 178 (1948), the Supreme Court ruled that the First Amendment does not protect ordinary crime and that the postmaster general may deny the use of the mails to persons in order to prevent fraud.

Read magazine and related companies launched a “Facts Magazine Hall of Fame Puzzle Contest.” After conducting administrative hearings, the postmaster general determined that the contest was a scheme to obtain money through the mail through false and fraudulent representations. He then entered a “fraud order” against Read, related companies, and some of their employees.

The original order blocked all mail to and from Read and the others, but the postmaster general later modified his order; the order the Court considered effectively limited the denial to mail about the contest.

Read and the others sued, complaining that the evidence was insufficient to support the postmaster general’s findings, and also that the governing statutes that authorized the fraud order constituted prior censorship of the mails and thus violated their First Amendment rights.

The district and appeals courts agreed that the evidence was insufficient and enjoined enforcement of the order. They did not address the constitutionality of the statutes.

In a 7-2 decision written by Justice Hugo L. Black, the Supreme Court found the evidence sufficient to support the postmaster general’s findings.

More critically, the Court found that the statutes were valid because the constitutional guarantees of freedom of speech and of the press—and the related reluctance about prior censorship—do not prohibit Congress from preventing the use of the mails “for perpetuation of swindling schemes.”

Justices Harold Burton and William O. Douglas dissented, but only concerning the sufficiency of the evidence.