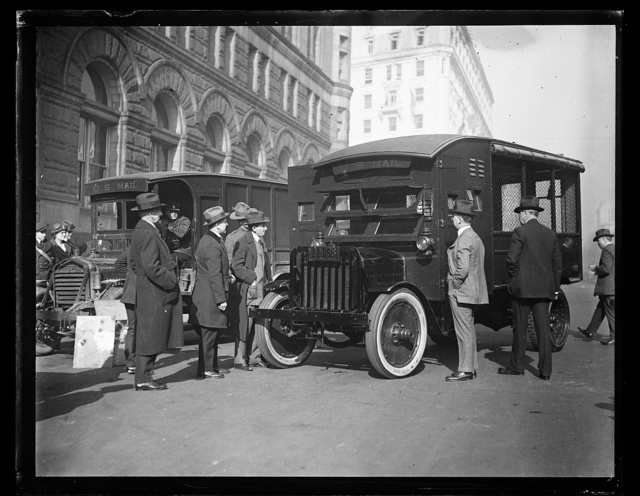 The Supreme Court in Leach v. Carlile (1922) upheld a fraud order against a business that was advertising through the U.S. Postal Service, which meant that postal service would no longer deliver his mail or payments of money orders. Justice Oliver Wendell Holmes Jr. dissented in the case, raising as unconstitutional 'prior restraint' of the speech. (Photo of U.S. Mail trucks in Washington D.C. in 1921, public domain)

Although the Supreme Court decision in Leach v. Carlile, 258 U.S. 138 (1922), upheld a fraud order issued by the postmaster general directed to a business advertising through the mails, it is best known for a dissent by Justice Oliver Wendell Holmes Jr. that emphasized that the First Amendment free press clause was designed to prevent prior restraints on both spoken and written words.

Fred Leach, through his “Organo Product Company,” was using the mails to sell tablets alleged to treat “nervous weakness, general debility, sexual decline or weakened manhood and urinary disorders . . . sleeplessness and run-down system” and other ailments.

Carlile, the postmaster general, effected a fraud order against Leach, prohibiting the delivery of his mail or payment of money orders. Leach sought an injunction against the fraud order. The district court refused the injunction, and the Seventh Circuit Court of Appeals affirmed. The case then made its way to the Supreme Court, which affirmed the lower courts’ decisions.

Writing for the majority, Justice John H. Clarke observed that the order had been issued after “an elaborate hearing” and was based on the factual issue of whether Leach was perpetuating “a fraud upon the public.”

Clarke observed that, in contrast to American School of Magnetic Healing v. McAnnulty (1902), the lower court review had determined not that Organo was “entirely worthless as a medicine” but that “it was so far from being the panacea which he was advertising it through the mails to be, that by so advertising it he was perpetuating a fraud upon the public.”

He said that the law had settled that the courts would not review decisions made by an executive department head when the law entrusted the official with power and it had been “fairly arrived at and has substantial evidence to support it.”

Dissent focused on First Amendment protection against prior restraint

Justice Holmes wrote a dissent, joined by Justice Louis D. Brandeis, acknowledging that precedents supported the majority decision but raising the presumption, which the Court would later highlight in Near v. Minnesota (1931), against prior restraint of publication.

He thought that written words were as entitled to protection as spoken ones, and even those who interpreted the First Amendment strictly agreed “that it was intended to prevent previous restraint.” Holmes also was troubled that in both law and as a matter of practicality, it was difficult to advertise apart from the mail and thought that the First Amendment should be interpreted especially broadly in such circumstances.