By John R. Vile
Related cases in Bar Admissions and Freedom of Association 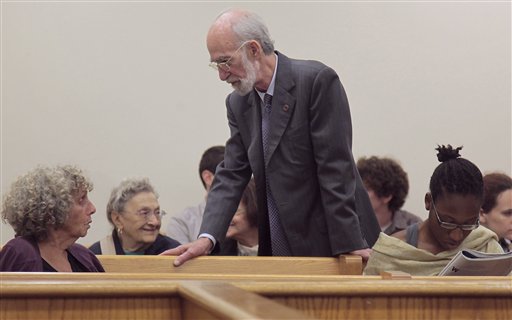 Attorney Martin Stolar, center, confers with a client in New York in 2012. Stolar was involved in the Supreme Court case In re Stolar (1971). Stolar refused to disclose his membership in organizations for membership to the bar of Ohio. The Court ruled that the First Amendment prohibits states from penalizing attorneys solely on the basis of membership in a particular organization. (AP Photo/Bebeto Matthews, used with permission from the Associated Press.)

In In re Stolar, 401 U.S. 23 (1971), the Supreme Court ruled that the First Amendment prohibits a state from penalizing an attorney solely on the basis of membership in a particular organization. This companion case to Baird v. State Bar of Arizona (1971) is one of a number of Court rulings related to admission to the bar that tempered earlier decisions in In re Anastaplo (1961) and Konigsberg v. State Bar (1961).

Stolar refused to reveal his assocations for bar admission

Martin Robert Stolar, who had been accepted to the New York bar, refused to answer a number of written questions required for admission to the bar of Ohio. Ohio required him to state whether he was a member of any organization that advocated the violent overthrow of the U.S. government and to list all organizations to which he had belonged since being a law student.

Writing for the Court, Justice Hugo L. Black said that questions about Stolar’s memberships in organizations was precluded by the Court’s decision relative to teachers in Shelton v. Tucker (1960). Black found that “The First Amendment prohibits Ohio from penalizing a man solely because he is a member of a particular organization.” Black further noted that Stolar already belonged to the New York bar and that he had supplied plenty of information for Ohio to check on his moral character.

Justice Harry A. Blackmun authored a dissenting opinion for four justices agreeing that Ohio had no general right to inquire into all of Stolar’s associations but asserting that the state could inquire as to whether he belonged to any organizations devoted to overthrowing the government by force. Similarly, Justice John Marshall Harlan II, in partial dissent, argued that a state could deny “admission to those who seek entry to the profession for the very purpose of doing away with the orderly processes of law” and affirmed “that temperate inquiry into the character of their beliefs in this regard ... is a relevant and permissible course to that end.”