By David Schultz
Other articles in Documents 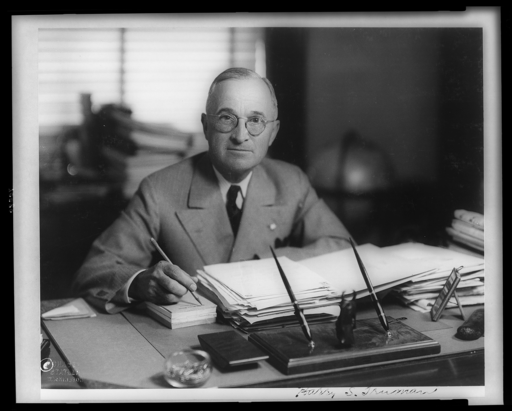 President Harry Truman, shown here in 1945, ordered the federal government in 1947 to catalog organizations engaged in subversive activity in the United States. The list of "subversive organizations" was maintained by the attorney general until it was abolished in 1974. The list chilled First Amendment freedoms. (Image via Library of Congress, public domain)

In 1947 President Harry S. Truman issued an executive order for the government to catalog organizations engaged in subversive activity against the United States.

The attorney general maintained and updated the list until its abolishment in 1974 during the Nixon administration.

The Cold War and the Soviet Union’s detonation of an atomic bomb exacerbated fears that members of the Communist Party were infiltrating major U.S. institutions, such as the motion picture industry, as well as the federal government.

Investigations in the 1940s by the House Un-American Activities Committee (HUAC) into alleged communist activity in Hollywood and various New Deal government agencies, such as the Federal Theatre Project and the Works Progress Administration, heightened concerns about subversive organizations operating in the United States.

In 1946 Congress passed the Atomic Energy Act, one of whose major provisions called for the Federal Bureau of Investigation (FBI) to surveil government employees and their associations to confirm their loyalty to the country.

As a result of the 1946 act, Truman on March 22, 1947, ordered the FBI and the Civil Service Commission to investigate the loyalty of every federal employee.

This so-called loyalty order called for the firing or dismissal of individuals when reasonable grounds demonstrated their disloyalty. “Reasonable grounds” included “membership in, affiliation with or sympathetic association with ... any organization designated as subversive by the Attorney General.”

HUAC compiled the initial list, which included 90 organizations mostly considered Communist Party fronts but also the American Jewish Labor Congress, the American Youth Congress, the National Negro Congress, and even the Progressive Party, which had nominated Henry Wallace for president in 1948.

Federal employees found to be members of or donors to these groups or who perhaps had friends who were members were fired or barred from government employment.

Thus, the government assumed one’s guilt of being a communist by association if one’s name appeared in connection with the attorney general’s list of subversive organizations.

The list was updated and modified several times, and during the heyday of anti-communist fervor in the 1940s and 1950s the list had a potent impact upon freedom of association.

Individuals denied or sought to hide their membership in these and other groups that they feared might be suspected of subversive activity.

Few at the time considered the list complete or accurate. Its main value was to hurt or politically cripple individuals whom Sen. Joseph McCarthy, R-Wis., wanted to investigate. It also gave sanction to the FBI and its director, J. Edgar Hoover, to monitor and investigate members of these organizations.