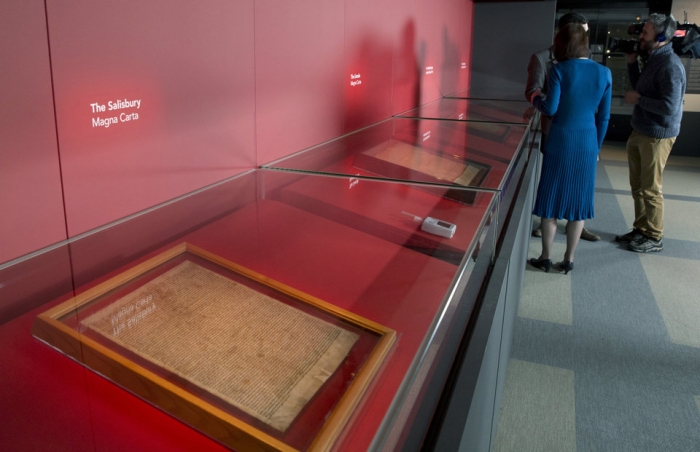 Members of the media film four of the original surviving Magna Carta manuscripts that were brought together by the British Library for the first time, during a media preview in London, Monday, Feb. 2, 2015. The event marked the 800th anniversary of the Magna Carta, which established the timeless principle that no individual, even a monarch, is above the law. The original Magna Carta manuscripts were written and sealed in late June and early July 1215, and sent individually throughout the country. (AP Photo/Alastair Grant, used with permission from the Associated Press)

The Magna Carta, or Great Charter, is a series of concessions that English noblemen extracted from King John I at Runnymede, England, in 1215, and that some later monarchs reissued. The document’s preamble and 63 clauses remain an important foundation for the rights claimed by English citizens, including those who immigrated to the United States.

Although Britain continues to operate according to the principle of parliamentary sovereignty and has never adopted a single written document, such as one resembling the U.S. Constitution, British citizens still look to the Magna Carta, as well as the later Petition of Right (1628) and English Bill of Rights (1689), as establishing fundamental principles that the government dare not violate. John Locke and William Blackstone were among the English legal theorists who expanded the principles of liberty in the Magna Carta.

"No taxation without representation" is most significant Magna Carta principle

In America’s colonial days, the most significant principle of the Magna Carta was that the king had no power to tax persons who were not represented in the government. Colonists cited this principle of “no taxation without representation” in the Declaration of Independence and in other documents that asserted colonial privileges. Before the Revolutionary War, the colonists viewed the charters issued to them by the king in the same way that they viewed the Magna Carta—as providing protections for their rights. Many of these protections were later incorporated into state constitutions before being expanded and incorporated into the U.S. Constitution and its Bill of Rights.

Magna Carta is foundation for due process clause of Constitution

Clause 29 of the Magna Carta prevented the English government from jailing or punishing an individual “except by the lawful judgment of his peers and by the law of the land.” This clause is generally understood to provide the foundation of the due process clause of the U.S. Constitution’s Fifth and Fourteenth Amendments.

The idea that nobles could meet with the king and present him with a set of grievances arguably foreshadowed both the peaceable assembly and petition provisions of the First Amendment. The provision of the Magna Carta that appears closest to the First Amendment is in Clause 1: “The English Church shall be free, and shall have her rights entire, and her liberties inviolate.” This text hardly prevents the establishment of a national church (Britain continues to recognize the Episcopal Church as the established church), as does the First Amendment, but it does acknowledge a sphere in which religious claims should be free of state supervision and control. Moreover, claims once associated specifically with the nobility have been widened both within Britain and the United States to include all citizens.