By James H. Read
Other articles in Documents 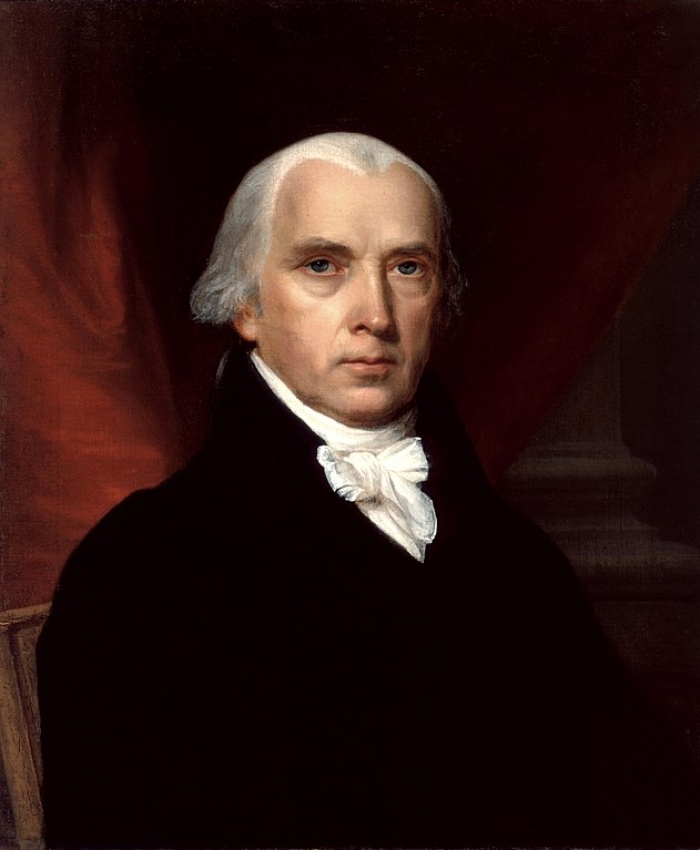 James Madison’s Report of 1800 argued for full freedom of speech and press as indispensable checks on officeholders under a republican form of government. Madison’s report, produced in response to the Alien and Sedition Acts of 1798, is especially significant because there was little substantive discussion of press liberty in the deliberations preceding ratification of the First Amendment in 1791. (Image via White House Historical Association, painted by John Vanderlyn in 1816, public domain)

James Madison’s Report of 1800 argued for full freedom of speech and press as indispensable checks on officeholders under a republican form of government. Madison’s report, produced in response to the Alien and Sedition Acts of 1798, is especially significant because there was little substantive discussion of press liberty in the deliberations preceding ratification of the First Amendment in 1791. Press liberty was agreed to be an important right, but its practical meaning was tied to colonial-era understandings; debate was limited to the question of whether jurisdiction over the press would become a federal power or remain purely under the auspices of the states.

The Sedition Act of 1798 put the First Amendment guarantee of press liberty to its first important test and evoked Madison’s impassioned response. In that year the Federalist-dominated Congress, responding to fears of foreign subversion and intense domestic partisanship, passed the Alien and Sedition Acts. The Sedition Act made it a crime to “write, print, utter, or publish...any false, scandalous, and malicious writing or writings” that would have the effect of bringing officeholders “into contempt or disrepute” in the opinion of “the good people of the United States.”

Supporters of the law, citing English common law precedent, claimed that the First Amendment prohibition on “abridging the freedom...of the press” only forbade “previous restraint on printed publications,” not subsequent punishment for what one had printed. The Sedition Act also provided that those charged were absolved if they could prove the truth of what they had asserted in their publications. Under the English common law, seditious libel, which had been explained by the English commentator William Blackstone, and the press law of most American states at the time, a publication could be punished for being seditious even if what it stated was true. Thus, supporters of the Sedition Act argued that it actually expanded press liberty by allowing truth as a defense.

The immediate purpose of Madison’s report was to explain and justify the Virginia Resolution of 1798, which Madison himself had drafted. The resolution and the report took up a number of crucial issues besides press liberty, including arbitrary treatment of legal immigrants under the Alien Acts, the proper allocation of power between the federal government and the states, and the permissible means of resisting unconstitutional laws. But Madison gave special emphasis to the Sedition Act’s assumption of power over the press, “a power which more than any other ought to produce universal alarm, because it is leveled against that right of freely examining public characters and measures, and of free communication among the people thereon, which has ever been justly deemed, the only effectual guardian of every other right.”

Madison began his treatment of speech and press in the report by countering the argument that under English common law “freedom of the press” meant only freedom from prior restraint on publications. He argued that the understanding of press liberty in English common law was inapplicable to a republic like the United States, which was founded on the principle that “the people, not the government, possess the absolute sovereignty.” In England it was a maxim that the king could do no wrong and that the power of Parliament was unlimited. In the United States, “the executive magistrates are not held to be infallible, nor the legislatures to be omnipotent; and both being elective, are both responsible,” and to hold public officers responsible, there must be a “right of freely discussing public characters and measures.”

Madison added that the actual practice in the United States had been to exercise “a freedom in canvassing the merits and measures of public men” to a degree that far exceeds “the strict limits of the common law.” Elected officeholders should not be protected against damage to reputation because the rise and fall of reputation is essential to republican government. If officeholders have violated the public’s trust—and the theory of republican government presupposes that this sometimes happens—then they “deserve the contempt or hatred of the people” and should not be able to shield themselves from criticism by restricting the press. Indeed, the greatest violators of the public trust were the ones most likely to demand the protections of the Sedition Act. The law also gave “undue advantage” to incumbents, who could freely vilify their electoral opponents in ways that would be punishable if directed against themselves.

Madison said Sedition Act was a violation of public trust

Madison denied that the “baneful tendency” of the Sedition Act was diminished by the opportunity to prove that one’s writings were true: first because it is extremely difficult for anyone to demonstrate “the full and formal truth” of every publication, and second because the obvious purpose of the law was to punish political opinions, not to correct misstatements of fact. Madison admitted that freedom of the press could be abused, but “some degree of abuse is inseparable from the proper use of every thing” and it is better to leave a few “noxious branches” than to cut away the “proper fruits.”

Madison observed that, during debate over ratification of the Constitution (1787–1788), “great apprehensions” were expressed about the omission of guarantees for essential rights and “the freedom of the press particularly.” Supporters of the Constitution, including Madison, had replied that the Constitution gave the federal government no powers beyond those enumerated in the document. But to remove the “doubts and dangers” ascribed to the Constitution, a constitutional amendment introduced by Madison himself was enacted that explicitly “declared the press to be wholly exempt from the power of Congress.” And so, given the unequivocal public record concerning the purpose of the First Amendment, Madison concluded, the enactment of the Sedition Act was itself a blatant violation of public trust “without a parallel in the political world.”

Madison’s principled commitment to freedom of the press went further than that of nearly anyone else in his day. Thomas Jefferson’s Kentucky Resolution of 1798 also denounced the Alien and Sedition Acts as unconstitutional but claimed that it is up to the states, not the federal government, to judge “how far the licentiousness of speech and of the press may be abridged without lessening their useful freedom.” Madison’s argument in the report, though immediately directed at a specific federal law, endorsed full freedom of speech and press at all levels of government.

Report has been cited in court decisions

Madison’s Report of 1800 has been cited in 20th century court decisions involving liberty of speech and press, most notably in New York Times Co. v. Sullivan (1964), in which the U.S. Supreme Court overturned a large civil damage award to an Alabama public official who had sued for libel after his reputation allegedly was damaged by an editorial advertisement decrying civil rights abuses in Montgomery.

This article was originally published in 2009. James H. Read is Professor of Political Science at the College of St. Benedict and St. John’s University of Minnesota. He is the author of Power versus Liberty: Madison, Hamilton, Wilson, and Jefferson (2000) and Majority Rule versus Consensus: The Political Thought of John C. Calhoun (2009), as well as several articles and book chapters in the field of American political thought. He is currently writing a book titled Sovereign of a Free People: Abraham Lincoln, Majority Rule, and Slavery.