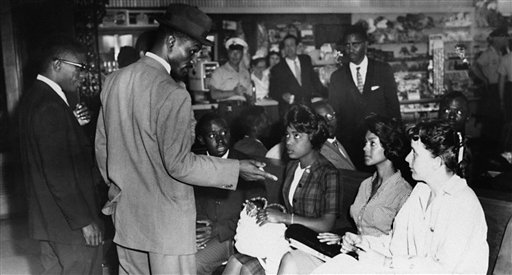 In as-applied challenges in First Amendment cases, litigants contend that a governmental law, rule, regulation, or policy is unconstitutional as applied to their expressive activities. The Rv. F. L. Shuttlesworth (pointing), Birmingham integration leader, was involved in an as-applied case. Shuttlesworth was arrested and sentenced to three months of hard labor after leading a march to protest institutionalized segregation in 1963. The Supreme Court overturned the conviction in an as-applied challenge, finding that Birmingham's public demonstration permit law was applied in an unconstitutional manner in violation of the First Amendment. (1961 AP Photo)

In as-applied challenges in First Amendment cases, litigants contend that a governmental law, rule, regulation, or policy is unconstitutional as applied to their expressive activities.

These challenges often are distinguished from facial challenges, in which litigants claim that a governmental regulation is unconstitutional “on its face,” that is, by the very text of the policy.

According to Richard H. Fallon Jr. (2000), “As-applied challenges are the basic building blocks of constitutional adjudication” (p. 1328). The Supreme Court will often decide a case on an as-applied basis to avoid unnecessary or premature decisions regarding the constitutionality of a law.

In several recent First Amendment decisions, the Court has avoided striking down laws on their face, emphasizing that the proper course of action is for a litigant to file an as-applied challenge if actual discrimination against their expression occurs.

For example, in Thomas v. Chicago Park District (2002), the Court rejected a First Amendment facial challenge to several park-permitting rules. Writing for the Court, Justice Antonin Scalia reasoned that any “abuse must be dealt with if and when a pattern of unlawful favoritism appears, rather than by insisting upon a degree of rigidity that is found in few legal arrangements.”

Court disagrees on whether a challenge is as-applied or facial

Sometimes it is less than clear when the Court is hearing a facial or as-applied challenge or both.

For example, in Los Angeles Police Department v. United Reporting Publishing Co. (1999), the majority opinion and the dissent disagreed over this very issue.

In the majority opinion, Chief Justice William H. Rehnquist called the challenge to an access-to-information policy a facial challenge. In dissent, Justice John Paul Stevens countered that “the majority’s characterization of this case as an improper facial challenge is misguided.”

Michael Dorf (1994) explains some of the tension in this area of constitutional law when he writes, “The distinction between as-applied and facial challenges may confuse more than it illuminates” (p. 294).