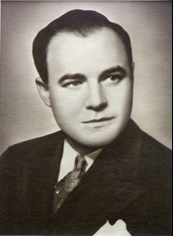 The Supreme Court decision in Joint Anti-Fascist Refugee Committee v. McGrath (1951), furthered First Amendment rights of speech and association by ruling that lower courts had improperly dismissed a suit against the U.S. Attorney General J. Howard McGrath (pictured here) by three organizations — all of which claimed to be charitable — that he had included on a list of designated Communist organizations. (Image via Wikimedia Commons, public domain)

The Supreme Court decision in Joint Anti-Fascist Refugee Committee v. McGrath, 341 U.S. 123 (1951), furthered First Amendment rights of speech and association by ruling that lower courts had improperly dismissed a suit against the U.S. attorney general by three organizations — all of which claimed to be charitable — that he had included on a list of designated Communist organizations.

Court ruled that the organizations could challenge their designation as "Communist"

The attorney general claimed to have been acting under provision of Executive Order 9835, giving him this authority. However, the Court ruled that these organizations had standing to challenge the classification.

Writing for the Court, Justice Harold H. Burton concluded that the attorney general’s decision to post the names of the organizations had been “patently arbitrary,” a case of administrative discretion being allowed “to run riot.”

In a concurring opinion, Justice Hugo L. Black likened the designations to a form of “unjustified governmental defamation.” Black argued that the classification amounted to an unconstitutional form of censorship because it allowed the attorney general to punish organizations and their members “merely because of their political beliefs and utterances.” He also thought the classification constituted an illegal bill of attainder, which he emphasized by including an appendix describing similar behavior under the Stuart kings of England.

In another concurring opinion, Justice Felix Frankfurter concentrated on demonstrating that the affected organizations had standing to sue. He also argued that they had been denied due process. Similarly, Justice William O. Douglas argued that the attorney general had gone too far in attempting to punish potential members of a fifth column within the United States. He associated the attorney general’s action with improper “guilt by association.”

Dissenters said government had right to protect itself

In the dissent, Justice Stanley F. Reed, joined by Chief Justice Frederick M. Vinson and Justice Sherman Minton, stressed the right of the government to protect itself. Reed observed that “[r]easonable restraints for the fair protection of the Government against incitement to sedition cannot properly be said to be ‘undemocratic’ or contrary to the guarantees of free speech.” If the organizations suffered by being identified for their affiliations, it was a consequence of their own actions. Any harm they experienced as a result of reduced contributions was not adequate to provide them with standing.