By Alvin K. Benson
Other articles in Issues Related to Religion 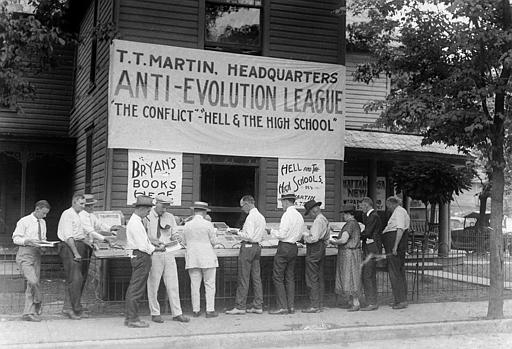 Evangelist T.T. Martin's books against the theory of evolution are sold at an outdoor stand in Dayton, Tenn., 1925, scene of the Scopes trial. (AP Photo, used with permission from The Associated Press.)

The concept of creationism holds that life originated through a process governed by a divine being, with some creationists believing that Earth is relatively young.

In contrast, Charles Darwin’s theory of evolution, published in 1859, purports that the various species of animals, including humans, are products of natural selection and random mutation that gradually, over long periods of time, produce more complex life forms from simpler life forms.

A controversy over the origin of life and related scientific theories has raged for decades, with creationists pitted against evolutionists. Legal decisions concerning the teaching of creationism and evolution in public schools hinge upon the First Amendment of the U.S. Constitution.

In the 1920s, some religious fundamentalists charged that teaching evolution was destroying people’s faith in God and in the Bible.

The Scopes monkey trial of 1925 in Dayton, Tennessee, focused on the issue of whether the theory of evolution should be taught in public schools. The outcome of the trial provided no resolution to the question of whether the First Amendment permitted states to ban teaching a theory that contradicted religious beliefs.

A decision was finally reached when in Epperson v. Arkansas (1968) the Supreme Court ruled that such bans on scientific theories directly conflicted with the establishment clause of the First Amendment.

The Court applied the same rationale in Edwards v. Aguillard (1987) to invalidate Louisiana’s Creationism Act, which required biology teachers who taught the theory of evolution to teach creationism as well. These two decisions paved the way for state legislative bodies to pass acceptable laws that would allow teachers to present scientific theories about the origins of life in public schools.

Advocates of creationism want to teach their theory in public schools

Since the 1980s, advocates of creationism, sometimes called creation science, have argued that they should have an equal opportunity to teach their views in public schools along with the theory of evolution in order to preserve academic freedom and to maximize scientific education about origins.

In 1999 the Kansas Board of Education removed the teaching of evolution from the state high school biology curriculum, but lawmakers reinstated it in 2001. In 2005 the Board of Education voted to include forms of creationism, particularly intelligent design (ID), as part of the scientific curriculum in Kansas high schools. Whereas creationism postulates a supernatural creator, ID simply suggests that life was designed but does not state the nature of the designer.

In Dover, Pennsylvania, in 2005, the local school board voted that teachers be required to read a statement about ID before they discussed evolution. District judge John E. Jones ruled that the Dover mandate was unconstitutional and that ID is simply a form of creationism.

Since 1968 federal legislators have cited the establishment and free exercise clauses of the First Amendment in ruling that a state, school district, or public school cannot ban the teaching of the theory of evolution, require equal time for creationism, nor require that a disclaimer about evolution be included in the public school curriculum.

Teachers can discuss creationism and controversies that involve religious topics, but if they do so they must present these topics in a nondevotional context that does not endorse any particular religion so that students of all faiths can attend school without a sense of coercion.