By Timothy J. O'Neill
Other articles in Issues Related to Religion 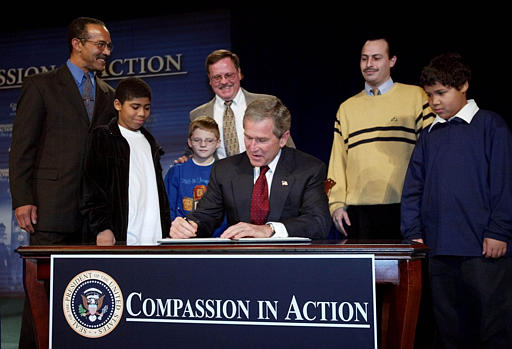 President Bush signs executive orders to advance his "faith-based initiative" at a meeting of religious and charitable leaders in 2002 in Philadelphia. Hoping to involve churches and religious organizations more deeply in government efforts to address social ills, Bush signed executive orders aimed at giving those groups a leg up in the competition for federal money. (AP Photo/Pablo Martinez Monsivais, used with permission from the Associated Press)

The U.S. government has long helped churches, religious neighborhood groups, and faith-related charities to pursue their public goals. The recent expansion of government funding for faith-based social programs, however, has sparked concerns about the constitutionality of such assistance.

Government has history of partnering with faith-based organizations

Government and faith-based organizations have been partners since Colonial America. The Congress that wrote the First Amendment also set aside in the Northwest Ordinance public land for churches. Presidents George Washington and Thomas Jefferson funded Christian missions for Indian tribes. Government programs for newly emancipated African Americans funneled much of their money through religious schools and social agencies. Local and state governments supported hospitals, medical clinics, orphanages, and homes for the aged operated by religious groups. Both state and federal governments have long granted tax breaks to religious institutions.

By the 1990s, the perception that faith-based organizations were both more effective service providers and closer to their beneficiaries than government bureaucracies prompted Congress to enact “charitable choice” provisions. Government regulations had previously required faith-based groups to establish completely secular affiliates or to alter their religious character before receiving funding. “Charitable choice” eliminated these restrictions.

Bush then issued a series of executive orders requiring equal treatment for religious organizations seeking federal funds, permitting them to use religious beliefs in selecting employees and methods but not in choosing clients, and barring religious worship in subsidized social programs. Funding is available through grants, contracts, and individual vouchers. By 2004, more than 10 percent of all federal grants were going to faith-based organizations.

Critics charge that the initiatives violate the establishment clause by delegating government functions to religious organizations and funding institutions whose secular and religious activities are inseparable. They fear that the religious freedoms of recipients are jeopardized by religious indoctrination. They also claim that exemptions from employment laws blur the boundary between private and government discrimination.

Advocates assert that government should assist faith-based social programs as long as it does so in a nondiscriminatory fashion without any endorsement or coercion. They acknowledge that the redemptive power of religion is critical to such organizations’ effectiveness, but they are confident that these organizations distinguish between permissible social services and impermissible proselytizing.

Advocates are also reassured that the government’s requirement that initiatives include secular alternatives protects beneficiaries from improper religious pressure. And they defend religiously based hiring as crucial to the success of such programs.

The Supreme Court has never struck down a government-funded, faith-based social program.

It upheld a federal construction grant to a Catholic hospital in Bradfield v. Roberts (1899), a federal grant to a faith-based counseling program for teenagers in Bowen v. Kendrick (1988), and, more recently, a series of programs involving indirect aid. The current Court is satisfied if government assistance is neutral — that is, nonreligious as well as religious organizations are equally eligible to compete for funding — and beneficiaries are offered genuine choices about where to go for assistance.

Relying on the Lemon test as modified by Agostini v. Felton (1997), the Court accepts as a sufficient secular purpose combating social and economic problems. The Court does demand safeguards to prevent the diversion of public funds for religious purposes. However, it presumes that faith-based organizations will comply with government restrictions and therefore that little oversight is necessary.

Faith-based initiatives continue to be controversial

Meanwhile, the controversies in this area continue to surface.

For example, in Hein v. Freedom from Religion Foundation (2007), the Court dismissed a challenge to the charitable-choice initiatives based on a lack of standing. That said, the battle over government aid to faith-based organizations will likely be more political than legal. The public supports such assistance, but important constituencies in both political parties are suspicious of it.