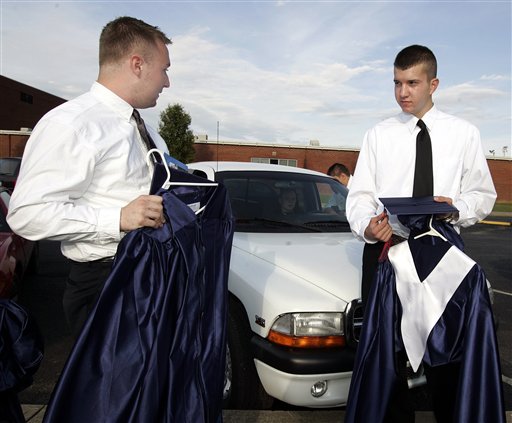 Graduating seniors Gabe McNeil, left, and Jason Russell talk about their plans before the graduation ceremony at Russell County High School in Russell Springs, Kentucky in 2006. About 200 seniors stood during the principal's opening remarks and began reciting the Lord's Prayer, after a federal judge's order banning prayer at commencement. The Supreme Court has established that students have limited First Amendment rights at school and school functions.(AP Photo/James Crisp, used with permission from the Associated Press.)

Supreme Court decisions have interpreted the establishment clause of the First Amendment not only to prohibit public prayers in public schools during school hours but also to exclude them from important school-sponsored functions. The Court has also ruled on other free speech concerns in schools.

Court has established that students have limited free speech rights

In Lee v. Weisman (1992), the Court ruled that a junior high school could not invite a member of the clergy to deliver invocations or benedictions at a graduation without unduly coercing those in attendance to be subjected to religious exercises of which they might not approve. The Court further extended this prohibition to student-led prayers at high school football games, in Santa Fe Independent School District v. Doe (2000).

Other Supreme Court decisions have established that students possess free speech rights in school but that these rights are more limited there than in other settings. While Tinker v. Des Moines Independent Community School District (1969) recognized that high school and junior high school students had the right to wear black armbands to school to protest the Vietnam War, the Court indicated, in Bethel School District No. 403 v. Fraser (1986), that schools could censor a student’s sexually oriented speech that was to be given before a school assembly. Similarly, in Hazelwood School District v. Kuhlmeier (1988), the Court upheld censorship of a school newspaper that would have been considered unconstitutional in other contexts.

Court has upheld the censoring of student graduation speeches

It is not altogether clear how such varied precedents apply to students’ graduation speeches. The Ninth Circuit Court of Appeals, in Cole v. Oroville Union High School District (9th Cir. 2000), upheld a decision by high school officials in Oroville, California, rejecting a proposed student prayer and a proposed student speech at graduation ceremonies. The reasoning behind the court’s decision was that both the prayer and the speech were attempts to proselytize that would involve the school in violations of the establishment clause by making it appear that the school was endorsing the students’ religious views. The school district was following its established policy of clearing all such speeches with the principal beforehand.

This Ninth Circuit Court came to a similar decision in Lassonde v. Pleasanton Unified School District (9th Cir. 2003). In that case, the principal had previewed the speech of a graduating high school valedictorian and concluded that the speech was proselytizing. The principal gave permission for the student to deliver a modified version of the speech and to distribute copies of his uncensored speech outside the graduation site. The court ruled that the principal’s censorship of the oral speech was appropriate: it avoided the appearance of the school’s sponsorship of such activities as well as the coercive effect on listeners who did not share the speaker’s religious beliefs.

The court rejected the idea that the Supreme Court’s decision in Good News Club v. Milford Central School (2001), which had opened a school to access by religious groups, compelled a different result. The judge observed that “[t]he graduation ceremony was a school-sponsored function that all graduating seniors could be expected to attend” and that “consideration of coercive pressure and perceptions of endorsement” were thus “in the forefront.” The court did not think the school was obliged to let the students speak and post disclaimers as to the content of the speech.

Another circuit court decision, however, clouds the picture. In Adler v. Duval County School Board (11th Cir. 2001), the Eleventh Circuit Court of Appeals upheld a procedure whereby a county in Florida allowed students to decide whether an opening speech and prayer would be given at the graduation ceremony, and it allowed the students chosen to deliver the words to do so without any prior censorship. This case has special significance because it came after the court reconsidered its original verdict in light of the Supreme Court decision in Santa Fe v. Doe.

Noteworthy, too, is that the judges on the circuit court split, with some judges viewing the school’s real purpose as the impermissible objective of promoting prayers, such as those the Court had invalidated in Lee v. Weisman. Such split decisions make it likely that the Supreme Court will revisit this issue in the near future.