By Hana M. Ryman and J. Mark Alcorn
Other articles in Issues Related to Religion 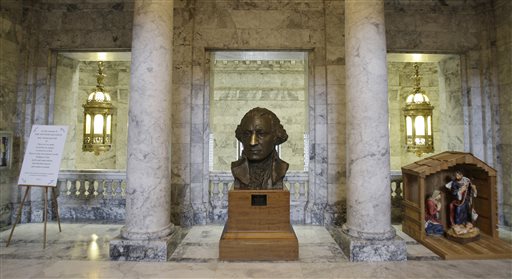 In this 2008 file photo, a permanently-installed bust of George Washington, center, is surrounded by a Christian nativity display, right, and a sign placed by the Wisconsin-based Freedom From Religion Foundation, Inc., for the holiday season at the Capitol in Olympia, Washington. The sign promotes the observance of the winter solstice and is critical of religious beliefs. Courts have looked at whether government observance of religious holidays violates the First Amendment. (AP Photo/Ted S. Warren, used with permission from the Associated Press)

Holidays are days that have been set aside to celebrate a cultural, religious, or national observance. Often these days have become special occasions — for example, Labor Day and Thanksgiving — when public schools and government offices are closed.

As the population of the United States has become culturally and religiously diverse, the observance of religious holidays has caused controversy in the workplace, in schools, and in public places. The conflicts arise from questions concerning the free exercise and establishment of religion clauses of the First Amendment.

If a government refuses to recognize religious holidays for fear of establishing or favoring a religion, does that refusal infringe on an individual’s right to the free exercise of religion? If it does recognize such holidays, is it violating the establishment clause? Several important cases dealing with these questions have been heard in the courts.

When Indiana’s practice of giving state employees Good Friday off with pay was challenged, the Seventh Circuit Court of Appeals, in Bridenbaugh v. O’Bannon (7th Cir. 1999), stated that a government may give employees a religious holiday as a paid vacation day, but it can do so only if it can provide a legitimate secular purpose for choosing a particular day. Bridenbaugh argued that Indiana’s practice, a law since 1941, violated the separation of church and state.

In 1998, Richard Ganulin, a Jewish lawyer, filed suit against the U.S. government alleging that the law making Christmas day a legal public holiday violated the establishment clause of the First Amendment.

Ganulin based his complaint on the fact that Christmas is a Christian holiday when Christians celebrate the birth of Jesus Christ. In Ganulin v. United States (S.D. Ohio 1999), a federal district judge in Cincinnati granted a motion to dismiss the case. Ganulin appealed to the Sixth Circuit Court of Appeals. In 2000 the Court of Appeals affirmed the district court’s decision in an unpublished decision and dismissed the lawsuit. Ganulin appealed the case to the Supreme Court, which denied certiorari in 2001, leaving in place the Sixth Circuit’s decision affirming the holiday’s constitutionality.

Since Ganulin filed his lawsuit, two major appeals to court decisions have been handed down regarding official holidays.

Public schools can celebrate holidays with both secular and religious significance

Supreme Court decisions on religion in public schools have stated that Christmas, Hanukkah, and other religious holidays may be observed in a secular manner. Teachers may teach objectively about the religious components of holidays when they deem the religious elements appropriate as part of the secular instruction.

In Lynch v Donnelly (1984), the Supreme Court, in a 5-4 decision, held that the City of Pawtucket, Rhode Island, could have a nativity scene on public property because it also displayed secular Christmas symbols, such as a Santa’s house and a Christmas tree.

The first display involved a Christian nativity scene inside Allegheny County’s courthouse. The second display was a large Hanukkah menorah, erected each year by the Chabad Jewish organization, outside the City-County Building.

In a 5-4 decision, the Court held that the crèche inside the courthouse unmistakably endorsed Christianity in violation of the establishment clause. By prominently displaying the words “Glory to God for the birth of Jesus Christ,” the county sent the message that it supported and promoted Christianity. The Court also held, however, that not all religious celebrations on government property violated the establishment clause; in context, the menorah simply emphasized the diversity of the season.

People who feel strongly that it is their right to place religious displays on public property are looking for ways to display religious symbols so that they pass the constitutional tests. And governments at all levels are becoming more sensitive to potential conflicts and the consequences of those conflicts.