By David L. Hudson Jr.
Other articles in Issues Related to Religion 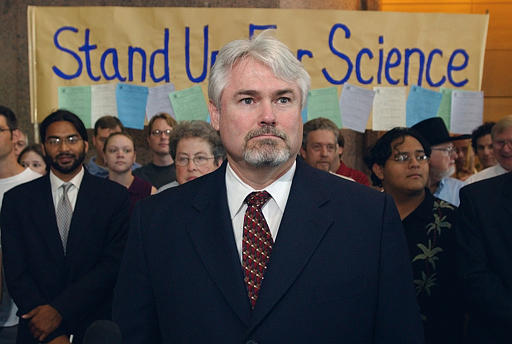 Larry Bethune, foreground, chairman of the Texas Freedom Network, waits to begin a news conference about proposed changes to Texas biology textbooks regarding the teaching of intelligent design and evolution, in 2003, in Austin, Texas. Proponents of the theory of intelligent design believe that because the theory is not religious, it should not be subject to the same constitutional hurdles as creationism. (AP Photo/Harry Cabluck, used with permission from the Associated Press.)

Intelligent design is a theory that the universe and its complex life forms cannot be explained solely by natural causes, and thus an intelligent higher power contributed to the origins of the universe. Any effort by school officials to teach intelligent design in public school science classes raises an establishment clause problem by blurring the lines between church and state.

Is intelligent design the same creationism?

The proponents of intelligent design believe it is not subject to the same constitutional hurdles as creationism, which clearly presents religious doctrine. In his book Law, Darwinism,and Public Education: The Establishment Clause and the Challenge of Intelligent Design (2003), Francis J. Beckwith contends that the arguments used to exclude creationism from the public classroom in Epperson v. Arkansas (1968) and Edwards v. Aguillard (1987) do not apply to intelligent design, which is not infused with Christian fundamentalism.

In Kitzmiller v. Dover Area School District (M.D.Pa.2005), a federal district court in Pennsylvania ruled that a school board’s policy calling for intelligent design to be taught in biology classes violated the establishment clause of the Constitution. The school board had passed a resolution in October 2004 that called on teachers to read a statement to students noting the “gaps/problem” with evolution and asking them to consider intelligent design as another explanation for life’s origins.

The trial began in September 2005, and U.S. District Court Judge John E. Jones III issued a 139-page opinion in December granting the challengers of the intelligent design resolution a permanent injunction. Judge Jones found that the school district’s resolution violated the endorsement and Lemon tests — two of the leading tests put forth by the Supreme Court to assess establishment clause controversies.

The endorsement test — proposed by Justice Sandra Day O’Connor in her concurring opinion in Lynch v. Donnelly (1984) — asks whether a reasonable, objective observer aware of the underlying controversy would believe that the government was endorsing religion. In applying this test, the judge found that “the religious nature of intelligent design would be readily apparent to an objective observer, adult or child.” Indeed, he added, intelligent design’s religious nature was shown by the fact that it believes in a “supernatural designer.” He also pointed out that “[t]he overwhelming evidence at trial established that ID is a religious view, a mere re-labeling of creationism, and not a scientific theory.”

The judge also found that the school board’s policy violated both the purpose and primary effects prongs of the Lemon test — as put forth by Chief Justice Warren E. Burger in Lemon v. Kurtzman (1971).

After the court’s decision,the membership of the school board changed,and the new board decided not to appeal the ruling to the Third Circuit Court of Appeals.

In January 2006, California school officials approved an intelligent design course in a high school in the El Tejon Unified School District. Members of Americans United for Separation of Church and State, who had successfully challenged the policy in Dover, Pennsylvania, sued in federal court, contending in Hurst v. Newman (2006) that this course would violate the establishment clause. Although school officials dropped the course in response to the lawsuit, intelligent design controversies will likely continue to surface in public schools.