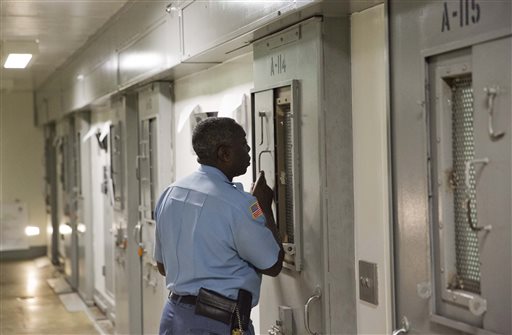 In U.S. jurisprudence, the First Amendment rights of prisoners are sharply curtailed. When analyzing prisoner speech claims, the Supreme Court has displayed considerable reluctance to second-guess prison administrators. The test from Turner v. Safley considers four factors in determining whether a prison regulation violates constitutional rights, giving prison administrators latitude to enact rules that have a valid reason. In applying the test, lower courts have rejected a wide variety of free speech claims. For example, they have upheld restrictions on prisoner access to typewriters, telephones and magazine and newspaper subscriptions, as well as incoming mail. In this photo, Capt. Dwain Williams checks on a prisoner in the the Special Management Unit in a Georgia prison in 2015. (AP Photo/David Goldman, used with permission from the Associated Press)

In Jones v. North Carolina Prisoners’ Union (1977), the Court upheld direct restrictions on efforts by prison inmates to form and operate a union — including a ban on soliciting other inmates to join the union, meetings among union members, and delivery of bulk mailings to inmates concerning the union from outside sources.

Delivering the opinion of the Court, Justice William H. Rehnquist established an extremely deferential standard for gauging the constitutionality of restrictions on prisoners’ speech. Citing “the wideranging deference to be accorded the decisions of prison administrators,” Rehnquist quoted Pell v. Procunier (1974) to the effect that “in the absence of substantial evidence in the record to indicate that the officials have exaggerated their response to [security] considerations, courts should ordinarily defer to their expert judgment in such matters.”

The Turner test is a deferential standard for prisoner speech cases

Ten years later, in Turner v. Safley (1987), the Court upheld broad restrictions on inmate-to-inmate correspondence — and, in the process, reaffirmed its commitment to a deferential standard in prisoner speech cases. Announcing a test that prevails to this day, Justice Sandra Day O’Connor held that “when a prison regulation impinges on inmates’ constitutional rights, the regulation is valid if it is reasonably related to legitimate penological interests.”

As applied by the federal courts, the first of these factors is most important. So long as the government can justify its regulation as promoting a legitimate interest in prisoner rehabilitation or prison security — reducing the likelihood, for example, of riots, escape attempts, suicide, physical violence or sexual harassment — it will be upheld unless “the logical connection between the regulation and the asserted goal is so remote as to render the policy arbitrary or irrational.”

In recent years, the Supreme Court has maintained its commitment to the deferential Turner test when deciding prisoner speech cases. In Shaw v. Murphy (2001), the Court held that restrictions on prisoner-to-prisoner correspondence should be analyzed under the Turner standard even if they inhibit a prisoner’s ability to provide legal assistance to a fellow inmate.

Applying the Turner test, federal courts have rejected a wide variety of speech clause challenges directed at prison regulations. They have sustained, for example, restrictions on prisoner access to typewriters and word processors, to telephones, and to subscription magazines and newspapers.

In the realm of prisoner speech claims, there are only two situations in which the courts depart from Turner and apply heightened scrutiny:

When it comes to a prisoner’s nonlegal mail, the courts draw a distinction between incoming and outgoing mail. Since the prison’s internal security can be seriously compromised by objects or communications entering the prison from the outside world, the deferential Turner test governs all restrictions on incoming mail. But the same elevated security concerns do not exist for a prisoner’s outgoing mail.

The Martinez test is used in outgoing mail cases

Accordingly, when the government censors a prisoner’s outgoing correspondence, the Turner test is not appropriate. Instead, the proper test is a form of heightened scrutiny derived from Procunier v. Martinez (1974) known as the Martinez test. There are two factors in the Martinez test:

With regard to legal mail, the Court applies heightened scrutiny to the speech claims of prisoners. Federal courts have expressed “heightened concern” for protecting the privacy and the unimpeded flow of all correspondence between a prisoner and his attorney. Prisoners have a well-established First Amendment right to be present whenever prison officials open their legal mail — and the officials may open it only to check for contraband, not to read it. Any effort by prison officials to read, withhold, restrict, or censor a prisoner’s legal mail must be subjected to heightened scrutiny.

Turner test used as standard for other First Amendment guarantees

But heightened scrutiny is available to free exercise claimants who invoke the Religious Land Use and Institutionalized Persons Act of 2000 (RLUIPA). In enacting RLUIPA and the earlier Religious Freedom Restoration Act (RFRA), Congress intended to depart from the Turner reasonableness standard, which the Supreme Court had established for prisoner free exercise claims in O’Lone v. Estate of Shabazz (1987).

RLUIPA provides that the government shall not impose a substantial burden on the religious exercise of a person residing in or confined to an institution even if the burden results from a rule of general applicability, unless the government demonstrates that the imposition of the burden on that person is in furtherance of a compelling governmental interest and is the least restrictive means of furthering that compelling interest.

This appears to be a strict scrutiny test, but in Cutter v. Wilkinson (2005) the Supreme Court cautioned that courts must apply the test with “due deference to the experience and expertise of prison and jail administrators in establishing necessary regulations and procedures to maintain good order, security, and discipline, consistent with consideration of costs and limited resources.” The Court specifically noted that “[l]awmakers supporting RLUIPA were mindful of the urgency of discipline, order, safety, and security in penal institutions.” The Court held that prison security is a compelling state interest, and it stressed that a prison is free to resist requests for religious accommodations that either impose unjustified burdens on other prisoners or jeopardize the effective functioning of the prison.

The Court showed sensitivity to an Arkansas inmate’s RLUIPA claim in Holt v. Hobbs (2015). The Court ruled that prison officials violated the inmate’s rights when they refused to allow him to grow a very short beard. Prison officials had argued that the restriction on even short beards was necessary to further prison security. They contended that prisoners could hide contraband in their short beards

Writing for the Court, Justice Samuel Alito rejected that argument: “We readily agree that the Department has a compelling interest in staunching the flow of contraband into and within its facilities, but the argument that this interest would be seriously compromised by allowing an inmate to grow one-half inch beard is hard to take seriously.”

Prisoners must exhaust all available administrative remedies before bringing lawsuits

Finally, lawyers who bring First Amendment claims on behalf of prisoners must pay careful attention to the Prison Litigation Reform Act (PLRA). Section 1997e(a) of the PLRA provides that “[n]o action shall be brought with respect to prison conditions … by a prisoner … until such administrative remedies as are available are exhausted.” Courts entertaining First Amendment challenges to prison regulations have held that such a lawsuit must be dismissed (without prejudice) if the prisoner fails to plead that he has exhausted all available administrative remedies.

This article was originally published in 2009. Kevin Francis O’Neill is an associate professor at Cleveland-Marshall College of Law where he teaches First Amendment, Evidence, Civil Procedure, and Pretrial Practice. His scholarship focuses on the Speech Clause of the First Amendment. Prior to entering academia, Mr. O’Neill served as the Legal Director for the American Civil Liberties Union of Ohio where he focused special attention on First Amendment issues, reproductive freedom, police misconduct, and government mistreatment of the homeless.