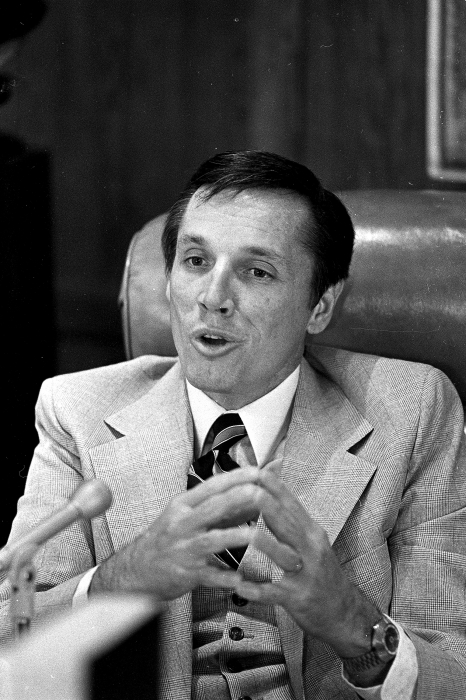 Bob Jones University argued that the IRS's decision to revoke its tax-exempt status because of the school's race-based discrimination violated the college's religious liberty rights guaranteed in the First Amendment. The Supreme Court in 1983 ruled against the college. In this photo, Bob Jones III discusses the basic philosophy taught at the university named after his grandfather in Greenville, South Carolina. "The Bible clearly teaches...that God has put (differences) among people...to keep the earth divided," Jones said at the time. (AP Photo, used with permission from the Associated Press)

Religious organizations seeking to exercise the First Amendment rights of free exercise and association have sometimes taken actions contrary to or seemingly at odds with state and federal laws against discrimination.

The courts at times have prohibited particular practices by these groups, but at others have allowed religious organizations to discriminate on the basis of religion or religious beliefs.

Bob Jones University, a nonprofit corporation in Greenville, South Carolina, emphasizes the Christian religion and the ethics presented in the Bible. The corporation operates a small school ranging from kindergarten through college and graduate school.

The university’s embrace of fundamentalist Christian religious beliefs has included prohibitions against interracial dating and marriage. Until 1971, African American students were excluded from the university, and from 1971 to 1975 the school did not accept applications from unmarried African American students, though it would consider applications from those who had married within their race. In 1975, the university revised its policy to permit unmarried African Americans to enroll, but they could not date outside their race or hold membership in any group or organization that advocated interracial marriage. Students engaged in such activity would be expelled.

In 1970, the Internal Revenue Service (IRS) adopted a district court decision that prohibited the organization from issuing tax-exempt status to private schools that engaged in racial discrimination.

The IRS concluded that Bob Jones University’s policies amounted to racism and revoked its tax-exempt status. The university claimed that the IRS had abridged the school’s religious liberty.

In Bob Jones University v. United States (1983), and the companion case of Goldsboro Christian Schools Inc. v. United States, the U.S. Supreme Court found in favor of the IRS. In the latter case, Goldsboro maintained a racially discriminatory admissions policy based on its interpretation of the Bible, admitting for the most part only white students. After paying a portion of the federal social security and unemployment taxes required of nonexempt organizations after the IRS revoked its exempt status, Goldsboro filed a refund suit claiming that the denial of its tax-exempt status violated the Constitution.

The question before the Court in Bob Jones University and Goldsboro was whether the government can prohibit race discrimination at the expense of the First Amendment’s clause guaranteeing the free exercise of religion.

In its opinion, the court noted that these institutions failed to meet the requirements of a special tax status by providing “beneficial and stabilizing influences in community life.” Their discriminatory policies excluded them from taxpayer support. Chief Justice Warren Earl Burger’s majority opinion declared that racial discrimination in education violated a “fundamental national public policy” and that the government may justify a limitation on religious liberties by demonstrating that it is necessary to accomplish an “overriding governmental interest.” Prohibiting racial discrimination was such a governmental interest. Only Justice William H. Rehnquist dissented.

Another instance of a religious-based organization charged with discrimination concerns the Boy Scouts of America, which has as its oath, “On my honor I will do my best to do my duty to God and my country and to obey the scout law. . . .“

Responding to a suit by an atheist couple whose son was excluded from the scouts, Judge Napoleon Jones, in Barnes-Wallace v. Boys Scouts of America (S.D. Cal. 2003), stated in his ruling that the Boy Scouts is a religious organization with a “religious purpose” because adult leaders and youth members are required to believe in a “formal deity” and to swear duty to God. He therefore thought that an agreement by which San Diego leased property to the scouts for a nominal amount violated the establishment clause of the First Amendment.

In another case, the Boy Scouts revoked former Eagle scout and assistant scoutmaster James Dale’s adult membership when the organization discovered that Dale was a homosexual and a gay rights activist.

In 1992, Dale sued the Boy Scouts, alleging that it had violated the New Jersey statute prohibiting discrimination on the basis of sexual orientation in places of public accommodation. The New Jersey Supreme Court affirmed the lower court’s decision that application of the state’s public accommodations law did not violate the Boy Scouts’ First Amendment right of expressive association because Dale’s inclusion would not significantly affect members’ abilities to carry out their purpose.

The Supreme Court agreed to review the case and ruled 5-4 in Boy Scouts of America v. Dale (2000) that “applying New Jersey’s public accommodations law to require the Boy Scouts to admit Dale violates the Boy Scouts’ First Amendment right of expressive association.” The Court believed that the Scouts had the right to exclude Dale from a leadership role consistent with its belief that homosexual behavior was immoral.

Religious organizations allowed to discriminate based on religion in hiring decisions

Title VII of the Civil Rights Act of 1964 prohibits employment discrimination on the basis of race, religion, gender, or national origin. The act also, however, gives religious organizations an exemption to use religious criteria in hiring “ministerial” employees, such as preachers, youth leaders, and the like.

In 1972, Congress expanded the exemption to include all employees of a faith-based organization. This expansion has been tested several times and consistently upheld.  Most recently, the Supreme Court upheld the ministerial exception in Hosanna-Tabor Evangelical Lutheran Church & Sch. v. E.E.O.C. (2012).

In that decision, the Court ruled that the ministerial exception applied to a former school teacher’s Americans with Disabilities Act claim.  “The interest of society in the enforcement of employment discrimination statutes is undoubtedly important,” wrote Chief Justice John G. Roberts. “But so too is the interest of religious groups in choosing who will preach their beliefs, teach their faith, and carry out their mission.”

More recently, the Supreme Court has upheld the rights of a religious organization to discriminate against gay couples. In 2021, the court said in Fulton v. City of Philadelphia that the city could not end its foster-care placement contract with Catholic Social Services because the agency, based on religious reasons, would not certify same-sex couples as foster families.

In 2022, the Indiana Supreme Court ruled that religious-freedom rights protect the Roman Catholic Archdiocese of Indianapolis from being sued by a teacher who was fired from his job at a Catholic high school for being in a same-sex marriage.

This article was originally published in 2009 and last updated in 2022 by encyclopedia staff. J. Mark Alcorn is a high school and college history instructor in Minnesota. Hana M. Ryman is a Middle School Humanities Educator in Orlando, Florida.