By Caryn E. Neumann
Other articles in Issues Related to Religion 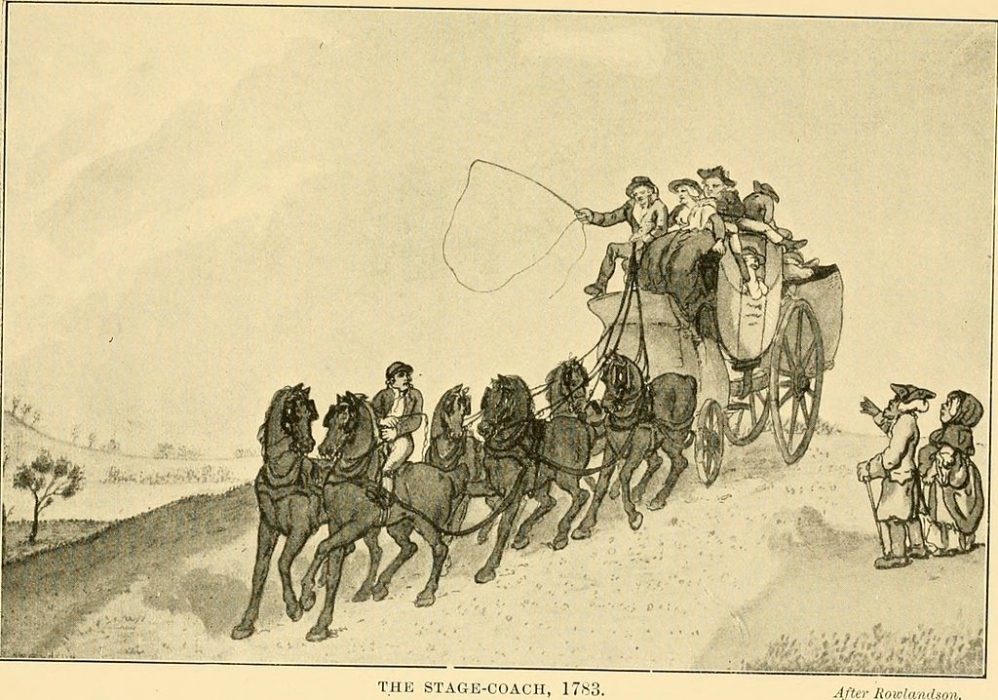 A 1783 illustration of a stagecoach shows how most mail was moved in the early days of America. But moving mail on Sunday, as well as allowing post offices to be open on Sunday for rural residents who came to town for church to pick up mail, emerged as a religious and political issue between 1810 and 1830. While opponents of Sunday mail said it violated the Christian Sabbath, proponents of the practice looked at commercial and national security concerns (Illustration via Wikimedia Commons from the book, Stage-coach and mail in days of yore : a picturesque history of the coaching age, public domain)

The opening of post offices on Sunday led to a national debate about the relationship of the federal government to the Sabbath day. The argument, which raged from 1810 to 1830, involved whether the national government would exist as a secular commercial republic committed to a separation of church and state or as a Christian commonwealth.

The battle over Sunday mail began in Washington, Pennsylvania, in 1809. The town postmaster, Hugh Wylie, followed the widespread custom of sorting the mail and keeping the post office open on Sunday to allow churchgoers from neighboring towns to pick up their mail after attending services. In this day of primitive transportation and poor roads, many families only came to town on Sunday, for church.

The Pittsburgh synod of the Presbyterian Church expelled Wylie for keeping the post office open.

The U.S. postmaster general, Gideon Granger, responded by persuading Congress in 1810 to pass legislation to open all 2,300 post offices seven days a week and transport mail every day. Congress immediately began to receive petitions from numerous religious denominations urging repeal of the law.

Granger and his successor, Return J. Meigs, were less committed to the post offices remaining open on Sunday than to the movement of the mail on Sunday. The petitioners, however, were unwilling to separate the two issues.

To suspend mail movement on Sunday would damage commerce, argued Granger and Meigs. Merchants relied on the rapid, consistent transmission of market information from city to city that could only be provided through the mail system. In addition, relations with France, Great Britain, and Spain were strained at this time, so both men raised the national security argument.

Granger and Meigs claimed that public officials needed to be notified as quickly as possible about events that might affect their constituents. Foreign agents might outrace the federal government with sensitive news if the government stopped Sunday mail transportation. Both postmasters also mentioned the issue of cost. Mail coaches often carried passengers with paid fares, thus subsidizing mail transportation. If coaches were forced to stop on Sundays, passengers might find other transportation, and postal rates would increase.

The arguments convinced Congress to reject repeal. All of the bills in support of repeal died by 1817 without coming to a vote.

In 1828 the General Union for the Promotion of the Christian Sabbath (GUPCS) launched a well-organized attack on the Postal Act of 1810, mobilizing merchants to challenge the commercial argument for Sunday mail. It circulated more than 100,000 copies of a talk delivered by the Rev. Lyman Beecher, a founder of the union. GUPCS boycotted the companies that ran coaches, boats, or canal packets on Sunday; New Jersey members once stopped a mail coach and forced the driver to stay in town until Monday morning. Members also circulated petitions.

First Amendment did not yet apply to state religious laws, including mail

The GUPCS chiefly argued that moving and delivering the mail on Sunday violated God’s will and that such sinful behavior threatened the future of the nation. The right of states to regulate their own affairs without federal interference was also raised since religious issues were left in other respects to the states at a time when the Constitution’s Bill of Rights did not apply to them. Other GUPCS members insisted that the federal government lacked the constitutional power to authorize the violation of the Sabbath.

Defenders of Sunday mail repeated the commercial arguments in petitions to Congress. Many merchants, especially those far removed from the major seaports, wrote about delays in receiving the latest information on market fluctuations.

They wanted to have the same advantages as Boston and New York merchants. They argued that government should properly be concerned with worldly goods and not with otherworldly salvation.

While the chair of the House committee waffled on the subject, the head of the Senate committee swayed Congress to keep the law. Gen. Richard M. Johnson of Kentucky, a devout Baptist, wrote in the committee’s 1829 report that congressional action to stop Sunday mail would be unconstitutional.

Johnson reminded Americans that they had religious freedom and that government had no right to coerce the religious homage of anyone. The invention of the telegraph in 1844 ultimately spelled the end of Sunday mail. It was now possible to get market information without the mail system. By the 1850s, postmaster generals were eliminating the movement of most mail on Sunday.