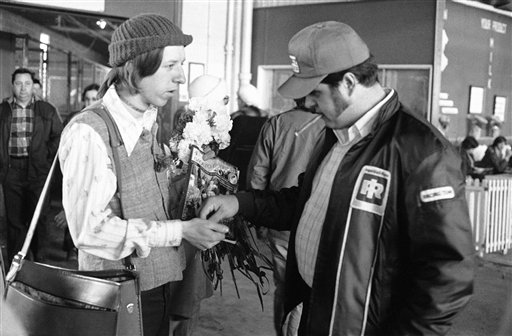 Content neutral refers to laws that apply to all expression without regard to the substance or message of the expression. An example of a content neutral law is a Minnesota rule prohibiting the sale or distribution of any merchandise, including printed material, in parks. The law was upheld in Heffron v. International Society for Krishna Consciousness (1981) after members of the Krishna sect alleged it restricted the First Amendment exercise of religion. In this photo, a member of the Hare Krishna Religious sect solicits funds at the Pennsylvania Farm show in Harrisburg, Pennsylvania, Jan. 11, 1977. (AP Photo/Fred Prouser, used with permission from the Associated Press)

Content neutral refers to laws that apply to all expression without regard to the substance or message of the expression.

Such laws generally regulate only the time, place, and manner of speech in contrast to content-based laws, which regulate speech based on content. This distinction is important in First Amendment cases because courts hold content-based laws to strict scrutiny — the highest form of judicial review — while holding content-neutral laws only to intermediate, or mid-level, scrutiny.

Content neutral laws are often found to be constitutional

Often, the distinction is determines the outcome of a case, as many content-based laws are struck down, but many content-neutral laws survive judicial inquiry.

Reviewing courts often label a law as content based or content neutral by determining whether the government passed the law in order to suppress expression.

The Supreme Court explained in Ward v. Rock Against Racism (1989) that “the principal inquiry in determining content neutrality, in speech cases generally . . . is whether the government has adopted a regulation of speech because of disagreement with the message it conveys.”

Content-neutral laws must regulate speech without reference to the speech’s substance, be narrowly tailored, and leave open alternative avenues of expression.

Examples of content-neutral laws that have been upheld

Examples deemed content neutral by the Supreme Court include: