By Cleveland Ferguson III
Other articles in Legal Terms and Concepts Related to Speech, Press, Assembly, or Petition 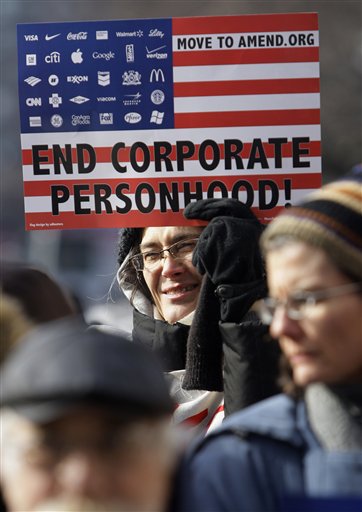 The Supreme Court's decision in Citizens United, which eliminated how much corporations could spend on political speech during elections, has stirred considerable public debate. Some feel it provides more First Amendment protection for political speech; others fear it gives corporations undue influence. In this photo, Nelli Johnson takes part in a rally in Cleveland as part of a nationwide protest in more than 100 cities on Jan. 20, 2012, on the second anniversary of the Citizens United ruling. (AP Photo/Tony Dejak, with permission from The Associated Press.)

Corporate speech refers to the rights of corporations to advertise their products and to speak to matters of public concern.

Commercial speech, as manifested through advertising, and political speech in the form of contributions and expenditures on behalf of candidates and political issues must be considered in assessing whether a corporation has the same rights under the First Amendment as people.

Regulation of commercial speech must survive intermediate scrutiny to pass constitutional muster, but political speech of a corporation must survive strict scrutiny.

The Supreme Court initially ruled that commercial speech had no First Amendment protection in a case involving a city prohibition on the distribution of commercial and advertising matter in the streets.

In Valentine v. Chrestensen (1942), the plaintiff, Chrestensen, had created a handbill advertising his business on one side and on the other, language protesting the city’s law, which he claimed affected his business. Finding that the government had the right to regulate methods of advertising, the Court determined that having “a civic appeal” attached to an advertisement would be a cheap way for corporations to gain immunity from government regulation.

The Court found the Constitution placed no limitation on the regulation of commercial speech and denied Chrestensen’s argument that such speech was protected by the First Amendment.

After more than three decades of silence on this issue, the Court in Bigelow v. Virginia (1975), and more explicitly in Virginia State Board of Pharmacy v. Virginia Citizens Consumer Council, Inc. (1976), found that advertising did indeed merit constitutional protection, though it was less deserving of protection than social or political discourse.

In Ohralik v. Ohio State Bar Association (1978), the Court upheld limits on some face-to-face solicitations by lawyers of clients.

Otherwise the regulation will be held unconstitutional. This is called the Central Hudson Test.

In the realm of corporate political speech, the level of protection once varied depending on whether the speech occurred in the context of an impending election.  Outside this context, corporations enjoyed broad political rights.

In First National Bank of Boston v. Bellotti (1978), for example, the Supreme Court invalidated a state statute prohibiting a corporation from making contributions to influence voters on ballot issues relating to matters outside the ambit of the business or assets of the corporation.

By contrast, in the landmark Buckley v. Valeo (1976), the Court upheld restrictions that limited campaign contributions to $1,000 by any person or corporation to apply to instances of “express advocacy” that mentioned a clearly identified candidate in an upcoming election.

The Court reaffirmed its position in Federal Election Commission v. Massachusetts Citizens for Life (1986) by upholding the amendment to the Federal Election Campaign Act (FECA) prohibiting corporations from using general treasury funds for contributions toward express advocacy in the context of an election but exempting non-profits from the regulation.

The Court reversed itself four years later with respect to nonprofit organizations in Austin v. Michigan Chamber of Commerce (1990).

In Federal Election Commission v. Beaumont (2003), the Court rejected a challenge to FECA regulations barring direct corporate campaign contributions to a nonprofit advocacy corporation in federal elections. It held, “Any attack on the federal prohibition of direct corporate political contributions goes against the current century of congressional efforts to curb corporations’ potentially ‘deleterious influences on federal elections,’ which we have canvassed a number of time before.”

In McConnell v. Federal Election Commission (2003), the Court upheld a federal regulation effectively barring a corporation from producing advertisements that mentioned a candidate’s name within 60 days of an election.  The Court stated, “We have repeatedly sustained legislation aimed at ‘the corrosive and distorting effects of immense aggregations of wealth that are accumulated with the help of the corporate form and that have little or no correlation to the public’s support for the corporation’s political ideas.”

The Court took a much different position in Citizens United v. Federal Election Commission, 558 U.S. 310 (2010).  In that case, which invalidated this ban, it decided that there was no constitutional basis for the distinction that it had drawn in Austin or McConnell between corporate and non-corporate speech.

In another win for corporate speech, the Court decided in Burwell v. Hobby Lobby Stores, Inc., 573 U.S. ____ (2014), that closely held corporations could not be required to provide coverage under the Patient Protection and Affordable Care Act of 2010 for forms of contraceptives that violated the owners religious beliefs.

These and related decisions have stirred considerable public debate between those who believe that widening corporate speech expands First Amendment protections and those who fear that it gives corporate entities undue influence.