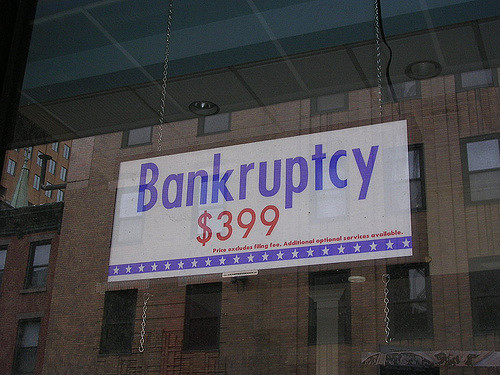 The Supreme Court has upheld some mandated disclaimers, such as those required by the Bankruptcy Abuse and Prevention Act. (Photo of bankruptcy advertisement with a disclaimer by Michael Coghlan via Flickr, CC BY 2.0)

The government mandates disclaimers to protect consumers, but they often present a First Amendment issue. Advertisers who resist disclaimers contend that forced disclaimers amount to a form of compelled speech. Supporters contend disclaimers present a less speech-restrictive alternative than flat bans on speech.

In Zauderer, the Supreme Court upheld a state rule requiring an attorney’s advertisements to include a disclaimer statement that clients could be required to pay significant litigation costs even if their lawsuits were unsuccessful. According to the Court, the lawyers’ “constitutionally protected interest in not providing any particular factual information in his advertising is minimal.” The justices, led by Byron R. White, added that disclaimers “might be appropriately required . . . in order to dissipate the possibility of consumer confusion or deception.”

The Court, however, hedged its ruling by noting that not all disclaimers would be constitutional: “We recognize that unjustified or unduly burdensome disclosure requirements might offend the First Amendment by chilling protected commercial speech. But we hold that an advertiser’s rights are adequately protected as long as disclosure requirements are reasonably related to the State’s interest in preventing deception of consumers.”

In Ibanez, the Court ruled that the Florida Bar could not censure an attorney for accurately stating she was a certified public accountant and a certified financial planner. Led by Justice Ruth Bader Ginsburg, the Court noted that the state had limited interest in suppressing truthful information, and that the required detail that a disclaimer would require would be too expansive to include on a business card.

In Milavetz, the Court upheld disclosure and disclaimer requirements in the Bankruptcy Abuse and Prevention Act. The Court reasoned that the requirements were reasonably related to the government’s interests in preventing inherently misleading attorney advertisements.

The lower courts are divided on the issue of whether mandatory disclaimers violate the First Amendment.

The Supreme Court declined to address the issue in Borgner v. Florida Board of Dentistry (2002). Justice Clarence Thomas, however, would have granted review, writing in his dissent: “This case presents an excellent opportunity to clarify some oft-recurring issues in the First Amendment treatment of commercial speech and to provide lower courts with guidance on the subject of state-mandated disclaimers.”