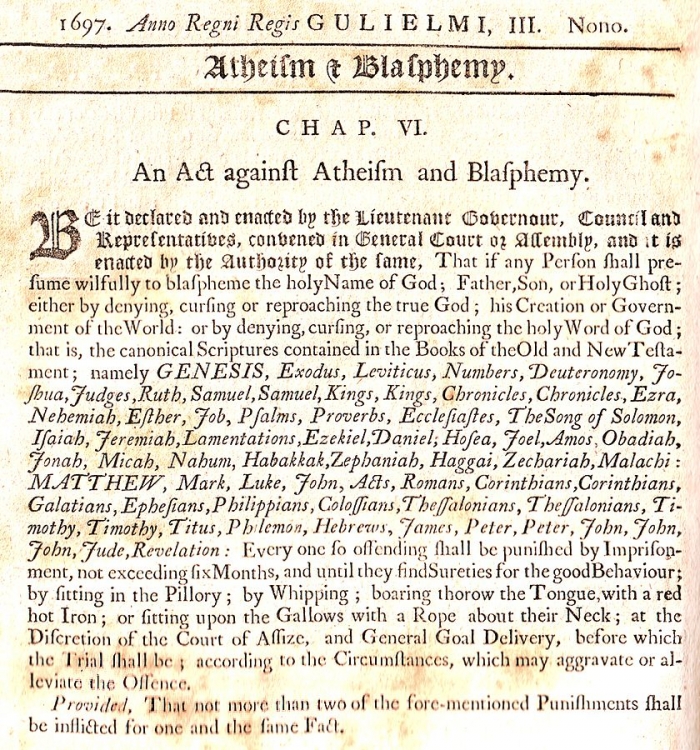 States prosecuted blasphemy in early America, and courts upheld the convictions, reasoning that the blasphemy laws were meant to preserve the peace, not punish beliefs. State v. Chandler (Del. 1837) was one of these cases. This photo shows a 1697 law against atheism and blasphemy in the Massachusetts colony. (Image via Wikimedia Commons, public domain)

The Delaware Supreme Court decision in State v. Chandler, 2 Del. 553; 2 Harr. 553 (1837), was one of the last state prosecutions of blasphemy. It is especially fascinating because it joins the debate as to whether common law incorporated Christianity. This debate was raised by Thomas Jefferson in a published letter to Major Cartwright dated June 5, 1824, and directed against the arguments of Joseph Story.

Thomas Jefferson Chandler had been convicted for having “pronounced and with a loud voice ... that the virgin Mary was a whore and Jesus Christ was a bastard” under an 1826 law making blasphemy an offense. The state supreme court reviewed that decision.

Justice John M. Clayton’s opinion for the Court cited numerous English and American decisions to establish that both oral or written words could be blasphemous.

The common law had accepted such prosecutions on the principle that such words were likely “to disturb the common peace.” Directly citing Thomas Jefferson’s letter to Cartwright, Clayton said that it rested on a misunderstanding. The common law would have permitted prosecution of blasphemy against Jews or Muslims, had these been the prevailing religion.

The concern of the law was that of preserving civil peace rather than that of punishing false beliefs. The test was that of “malicious and mischievous intention,” which could be ascertained from the circumstances.

Clayton examined the Delaware Constitution to show that its provisions for freedom of conscience needed to be considered in light of the reservation that no one should “disturb the peace, the happiness or safety of society.” As in Gitlow v. New York (1925) and other later cases involving subversive speech, Clayton focused on “the tendency of the words.”

The court upheld Chandler’s conviction and fined him ten dollars, sentenced him to 10 days of solitary confinement, and posted bonds for each offense.

The following years, the Massachusetts Supreme Judicial Court upheld another blasphemy conviction in Commonwealth v. Kneeland (Mass. 1838), which was apparently the last in U.S. history.