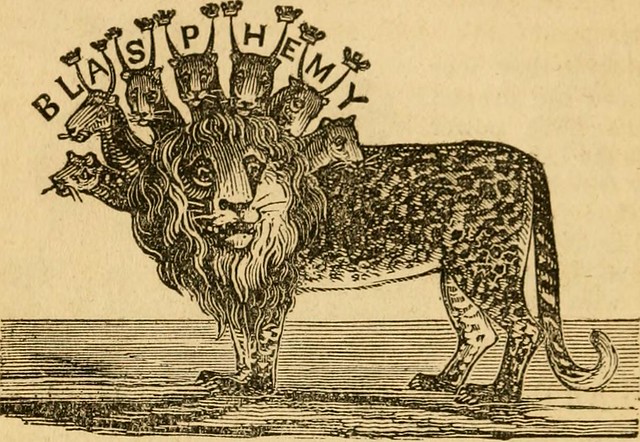 After a Pennsylvania man was convicted of blasphemy based on a 1700 law, the state's Supreme Court in Updegraph v. Commonweath addressed whether the law conflicted with the freedom of worship found in the Constitution. Upholding the conviction, the authoring justice found in 1824 that Christianity was part of common law, and said that the blasphemy law only punished "malicious" behavior that led to breach of peace or provoked others. (This image of a beast that spoke blasphemies is found in "Illustrations of prophecy" published in 1840, via Internet Archive Book Images, public domain)

The Pennsylvania Supreme Court decision in Updegraph v. Commonwealth, 11 Serg. & Rawle 394 (Pa. 1824), reviews a blasphemy conviction and addresses whether American law incorporates British common law ideas that may be in tension with the First Amendment.

Man convicted of blasphemy in Pennsylvania

Abner Updegraph, who belonged to a debating society, had been fined ten shillings under a state law adopted in 1700 for saying that the Bible was full of fables and lies. Writing for the Court, Justice Thomas Duncan did not think the fact that Updegraph had spoken as part of a debating association was a mitigating factor.

Indeed, he feared that the association “would prove a nursery of vice, a school of preparation to qualify young men for the gallows, and young women for the brothel.” Duncan proceeded to address two issues: whether Christianity was part of the common law and whether the prosecution had been properly framed.

Duncan cited James Wilson as stating that “Christianity is part of the common law.” Duncan observed that in 1818 a Mayor’s Court in Philadelphia had upheld a blasphemy conviction against an individual named Murray. Without such laws “every debating club might dedicate the club room to the worship of the Goddess of Reason, and adore the deity in the person of a naked prostitute.”

He noted that the laws only punished “malicious” behavior and did not attempt to choose between the doctrines of general Christianity. Blasphemy could be prosecuted either when it led to “an actual breach of the peace, or doing that which tends to provoke and excite others to do it.” Duncan explained that blasphemy laws did not restrict the beliefs of Unitarians or Jews. The intention of the laws was “not to force conscience by punishment, but to preserve the peace of the country by an outward respect to the religion of the country, and not as a restraint upon the liberty of conscience, but licentiousness endangering the public peace.” Thus, the state prosecuted “profane swearing, breach of the Sabbath, and blasphemy” not “as sins or offences against God, but crimes injurious to, and having a malignant influence on society.”

Having thus attempted to prove that the common law included Christianity, Dunan found the specific indictment in this case flawed. Like the law it was enforcing, the indictment should have included the word “profanely”; without it, the conviction could not stand.